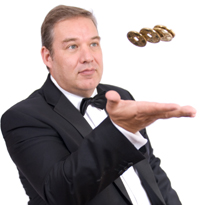 Chris Wood came to give a lecture to South London Magic Society and was not sure which one to give – he has three. After asking us what we wanted, he decided to give us a mixture of all three!

He started with his opener “a bill switch – paper to note” and talked about his patter and how he came to break the trick down, so that you didn’t have to do some unnatural movement/covering at the end. It was flawless.

He then showed us a coin routine where he wasn’t one ahead but two ahead and also a ring to necklace.

After the break we did some cards tricks, a dice trick and a mentalism trick.

Throughout the lecture he broke everything down and gave his reasoning why he did what he did, and the thinking behind it. He also talked in depth about scripting, misdirection and palming.

He had the club eating out of the palm of his hand and you could hear a pin drop as they sat in awe. Chris had Alan Alan as his mentor and studied together with Michael Vincent. You can see why he holds court in The Magic Circle Club room where he will session for hours with fellow pro’s as his attention to detail was phenomenal.

Highly recommend and something for everyone. He was also very kind/generous to session with some of the younger members of the club afterwards.