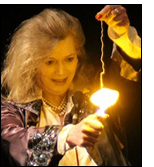 Fay Presto came to lecture at South London Magic Society recently and was a breath of fresh air.

At the beginning Fay set up a table (as you would find at a restaurant) which she brings with her (and is all screwed down and fits in the back of her car). We then had some muggles in for the first part and Fay did her set, with a few extras. This took about 30 minutes. Everything was happening right in front of their eyes and to see the look on their faces of astonishment and wonder was a joy to behold.

We then took a break (the muggles left) and Fay broke down each of her routines one by one.

She talked about the power of three (three steps to make a trick really magical) and talked about the pros and cons of Invisible Deck vs Brainwave. Nothing was mindbogglingly difficult to do, but Fay made everything look so easy and polished (she’s done it a million times). Everyone came away with something, and I know some members have already started using some of her ideas and routines, especially the reappearing candy for Halloween.