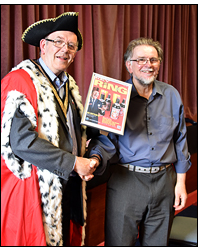 Although some of the regulars were away on holiday for our July meeting, they were more than counter-balanced by a number of colleagues who we had not seen for some time, and it was a delight to have them with us again. They had come to welcome our good friend Geoffrey Newton, visiting for the third time since our centenary in 2014.

Geoffrey’s theme for his ‘Key Ring Lecture’ was magic on the cheap – as opposed to cheap magic! He argues that, while Woolworths was once the biggest magic dealer in the country for those with a magical turn of mind, that position has now been taken over by the proliferating pound shops and bargain outlets such as the Works. Thus, anyone intending to make up some simple props can do so for a very modest outlay.


Geoffrey began by explaining the origins of the British Ring’s Key Ring magazine, of which he is editor, and set out to put into practice a selection of the many effects which have appeared in its pages.

First up was a card prediction from a bag, the card physically growing in size as well as value; then there was Jack Diamond employing another simple force and four large diamonds – again available from Poundland or similar by the bag-load. Four large dice from the Works were stacked by an audience member and covered by an empty Pringles tube (much more convincing than a specially decorated prop) before the total of the hidden sides was predicted. This could be given an extra boost by phoning a friend for the result, thereby projecting the routine into the realms of real magic.

There was a nifty Just Chance effect using plastic toy eggs courtesy of Ian Adair, and a similar one using envelopes held by bulldog clips. The psychology behind this was very strong, as the birthday child, or whoever was helping, came away winning the prize against all the odds, as opposed to the ‘clever-dick’ magician doing so, which is the traditional scenario. Again, a gift from the pound shop did the trick, putting the performer in a good light for minimal expense.


There followed another prediction using a star-shaped stand, and a book test using Dr No, the first James Bond novel to be filmed. This was achieved by cleverly combining the standard miscalled page ploy with the possible permutations resulting from two rolled dice. A couple of ‘fairy doors’ photo frames were then used for the Doors of Destiny, working on the old Lovey Duck principle, and sunglasses were predicted from a series of items required for a holiday. Joe Riding’s Split Decision had inspired Pasteboard Prediction Plus, while the snappily-named You Must Be Joker-ing revolved around the idea of marked cards.

Rounding off the session came the Mystery Mayor, in which I was prevailed upon to don a mayoral rig-out before being revealed as the Mayor of Derby; the effect having been created for British Ring President Clive Moore. That town, of course, had been predicted on the back of the mayor’s chain. Geoffrey concluded by presenting me with a framed cover of the latest edition of Key Ring; a thoughtful and generous gesture, greatly appreciated.

So ended an afternoon of simple, yet effective, magic which blended well established principles while using cheaply accessible materials. What more could you ask for?