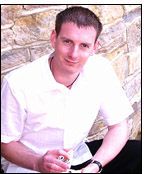 James Brown is a fairly well known sleight of hand magician and pickpocket. He won the “Magic Circle Close-up Magician of the Year” award in 2006. I have had the privilege of having numerous phone conversations with James and I have gleaned much information from his experience and advice. It is hardly surprising then, that when I saw that the man was going to be coming to my local magic club, I HAD to go.

James started his lecture by showing us an impromptu one coin routine. It started off with the coin appearing on the back of a mans hand, appearing in James’ eye, appearing on the mans shoulder, appearing under the mans watch before making the coin disappear and the mans watch to appear on his shoulder. It was really amazing to watch James giving the explanation and giving all the points that make this routine work and to spoil what you may have been thinking-there is only one coin used in the whole thing.

He then went on to explain a new version of “band-it”, a card trick that originally appeared on his DVD “Still Fancy a Pot of Jam?” The effect is hard to describe but the deck is placed in the box and a rubber-band is wrapped round the deck and a spectator’s hand. When they release the deck the selected card appears on the back of their hand. It’s a lovely effect.

He then went on to show us a really nice trick where a selected card materialised under a spectator’s hand. This is a phenomenal effect that I imagine can get equally phenomenal reactions.

James then showed us a version of card under box that happens in the spectator’s hand. If you don’t know much about James then you will soon learn that he loves to do things in spectator’s hands. This trick has some devastating phases including deck under box.

After the break we were treated to a bold, but lovely version of card IN box which is something I’ll definitely be working on.

He showed us a startling transformation/prediction which is quite possibly the best trick involving a business card I have ever seen in my life. Whatever reason you have to give your card out should instantly be dropped and replaced by this. It’s absurdly visual, involves fire and again, happens in the spectator’s hand.

We were also shown an effect, the title of which is two words long and has been abbreviated by James to TT. James hasn’t divulged any details about this effect in his information so far and therefore nor will I (hence the abbreviation.) what I will say though is it’s James take on a classic plot of card magic and it’s the best version ever. I think I am correct in saying that it baffled the WHOLE room.

James finished by going into detail about card under watch. There is so much genius thinking that goes into this routine and James has two different routines which he performs. They are very different from each other. In what is perhaps the more effective version-a card is merely thought of and is found under the mans watch. I might add that he doesn’t say the name of the card that he thought of until there is clearly a card shown folded up under his watch.

The evening was filmed and is going out on DVD soon-do yourself a favour and buy it. Or even better-book James to lecture at your magic club.

You won't regret it.