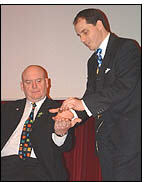 My only prior experience of the mysterious world of picking pockets was a shockingly bad amateur dramatics production of the musical ‘Oliver’, in which I witnessed a bedraggled grubby old man, use his nimble fingers to steal from unsuspecting strangers whilst singing joyfully about his craft. This production marred my perceptions (and indeed provided some rather frightening nightmares) of what exactly the art of picking pockets was, so when I was invited to James Freedman’s Magic Circle lecture on the subject I was a little unsure of what to expect from ‘The Man of Steal’.

Far from being a grubby cockney with a bad singing voice, James is actually a wonderfully erudite performer who commanded the stage and captivated the Monday night crowd’s enthusiasm for a subject that he is quite simply an expert on. This was demonstrated immediately as James, immaculately dressed and clearly spoken introduced himself and then proceeded to return watches, phones, packs of playing cards, sponge balls (only magicians…), wallets and other assorted items that he had stolen from unsuspecting Magic Circle members prior to the lecture whilst they were having a pre-show drink downstairs. From here James went on to explain not only the methods he employs to steal such items, but also some of his thinking behind the effects and structuring of pickpocket routines. He explained that fundamentally there are no secrets in picking pockets other than the fact that he “takes things out of other people’s pockets without them noticing”. With this as a starting point James continued to explain that as with magic, being a pickpocket is all about the effect, but that the effect is essentially the same as the method. If the eventual effect is what is desired, and looks good then the method by which it was achieved should not be a problem, a valuable piece of thinking which can be adapted to all magic practitioners, not only those interested in pickpocket techniques. To demonstrate this point he invited a member of the audience on stage and in doing so ‘stole’ his wallet and presented it to an instantly baffled audience. He then explained “It’s not his wallet – it was in my pocket already. Remember like magic the effect is everything”.

James explained that presentation is paramount to the success of a good pickpocket act and demonstrated several ways in which a pickpocket effect could be framed. With only one ‘effect’ it is important to structure routines in a way that doesn’t become boring by using techniques which allow the audience to either be ‘in on it’ or alternatively so that the steals are covert in order to allow for a surprise. In addition to performing and demonstrating these effects live with members of the audience, James also showed video clips of his work, to walk the audience through the various stages of some of his routines, explaining some methods along the way and more importantly how he gradually builds the routines up to an interesting and surprising climax.

The most exciting of these clips, from my perspective as an avid viewer of the new ridiculously addictive television show ‘Hustle’ on BBC 1, was an appearance that James made on ‘This Morning’ in which he picked the pockets of studio guests and production staff in the green room under the guise of being a security guard to promote the show which deals with the world of the ‘con artist’ and features some pickpocket and card sequences provided by Dynamic FX who acted as consultants on the production.

James went on to deal with the process of how to practice picking pockets and demonstrated some of the methods he uses including the ‘fake return’ of items and more direct pickpocket methods including stealing watches, cufflinks, wallets and even ties! The skill and pace at which these were performed was phenomenal and requires the same level (if not more!) of the disciplines required in ‘jazz magic’- essentially James literally works with what is on stage and in people’s pockets and constructs the routines as he goes along. With thanks to John Fisher, James then showed a video clip of one of his inspirations ‘Borra’, performing a stunning pickpocket demonstration on the Parkinson show in 1978. The lecture closed with James answering many questions posed by the audience.

This lecture was clearly influential as within about thirty seconds of the lecture concluding there was a veritable herd of magicians scrambling to get a copy of James DVD ‘Stealing the Show’ and his book ‘Go on.. steal yourself’ from the Devant Room (I practically had to break up a fist-fight between two elderly members!). Both are available online (the DVD and book, not the old Circle members) and I would strongly suggest that if you want to add some pickpocket moves to your repertoire then you get yourself a copy as both will prove to be an invaluable reference point.

Visit www.pickpocket.co.uk for more details and catch Hustle on BBC 1 Tuesdays at 9pm