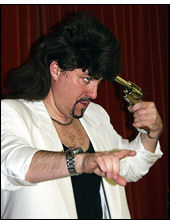 Jasper Blakeley’s lecture was like a breath of fresh air. It strayed from the more conventional approach of teaching tricks and concentrated on making us all look at how we can become better performers. Of course for this sort of lecture to work well, the lecturer has to have proven that he knows what he is talking about, and I believe Jasper established that very early on.

The first part of the lecture began with a discussion on Confidence and flexibility. It included approaching tables, handling difficult spectators and getting the most from the people you are performing to. There were even some nice tips that included bananas and jelly babies that bizarrely made perfect sense.

Jasper was keen to get everyone present involved in any discussions which gave the lecture the intimacy of a workshop. A lot of the time this sort of format doesn’t work, but in this case it did, and wonderfully so, probably because the subject matter was something we had all experienced and it wasn’t long before the whole group were actively getting involved.

I know this lecture worked well because the members were still talking about it for days afterwards. In fact not just the lecture itself, but the subjects covered. This proves to me that it brought up important topics and it was nice to know the “workshop” was continuing even without Jasper’s presence.

Before getting into Magic, Jasper Blakeley was amongst other things an actor and this certainly held him in good stead for everything he had to impart to us on his next topic which was all about character development. It is an undeniable fact that he has invented some amazing characters, including “Unlce Al, The Kiddies Pal” and perhaps the most famous “Kockov, the Russian Mentalist”.
Under the guise of Kockov, he has produced a couple of DVD’s (The plunge of Death and Diabolical) that feature some of his strongest routines.

We got to see both Uncle Al and Kockov on the night, which meant that as well as a lecture and workshop, we also had a little bit of performance which in itself was worth a hundred trick explanations. In fact I am sure that most people who bought the DVD’s afterwards, did so not just because of the routines but because we wanted to see the recorded show that is included on them.

He ended the meeting proper with Kockov performing his Russian Roulette. It certainly had me on the edge of my seat and was undeniably an excellent piece of theatre.

Unfortunately we have to be out of the building by 10 o’clock which was a shame as he was just getting into full flow, but luckily for us we adjourned to a local pub where Kockov reappeared and performed the Plunge of Death, some close up magic and even some hypnotism to some of the unsuspecting locals. To say this went down well is a huge understatement and was a highlight of the evening as we got to see one of Jaspers characters working in the real world.

The lecture and performances were very much levelled towards over 18’s, but I think Jasper sized us up at the beginning and gave us what we wanted. I am confident that he would adapt equally well to any audience young or old. He had some good things to say and he says them in an entertaining way.

The lecture is thoroughly recommended, and I would love to see Jasper at Blackpool one year. A lecture and Kockov in the gala show would be perfect.