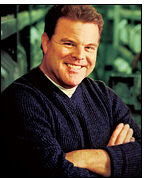 Probably the most unlikely venue for one of the world's foremost close-up magicians to lecture at, however, the evening proved to be a resounding success. Terry Seabrooke emceed the lecture and announced that we were in for a real treat; how right he was!

John opened with two effects; "Silver and Glass", his version of Dai Vernon's "Five Coins and a Glass" and "Streamlined Cylinder and Coins", his interpretation of Ramsey's routine. Both were performed flawlessly.

He went onto explain the routines, describing all the nuances/subtleties of the sleights, emphasising the need for strong misdirection and a natural relaxed performing manner as expounded by Ramsey and Vernon.

"Just A Cigar" followed on which was my favourite effect of the evening. A large Havana cigar is withdrawn from a tiny purse. A spectator examines the purse which is empty, then another cigar is immediately pulled from the purse. Two more cigars are produced from behind the spectator's ear and from his shirt pocket. The last cigar is vanished and found to be back inside the purse. Brilliant!

I had the pleasure of assisting John with a coins through hand effect ("Polite Penetration" from "Carneycopia") using a £10 note rolled into a tube, a pencil and four coins. At arms length, (that's really close-up) I was completely fooled.

The last effect of the evening was "Up My Sleeve" a cards across using a gimmicked card. Once again, lucid explanations of the dribble force, several palms, a card cop, the construction of the gimmick and how to create the illusion of a card sliding out of the sleeve.

John shared his thoughts on rehearsal and practising of routines. He explained that his method of rehearsal was structured so that the hours of practise spent routining, would result in a performance that looked unrehearsed, natural and suited to his personality. He quoted Ross Bertram, his mentor, who suggested that a routine should be practised twelve times sequentially, e.g bill in lemon: twelve bills, twelve lemons. twelve scripts, with emphasis on imposing your interpretation and personality on the effect.

Overall, I thought that this was probably the best lecture I had ever attended. The response from the other spectators seemed to confirm this.

Two magical "celebrities" were present, David Berglas and Jerry O'Connell. For the price of only £15 I listened to a lecture that lasted for just over three hours. There was a fifteen minute break for refreshments (which David Berglas very kindly provided) and had the pleasure of being entertained, educated and delighted by the affable consummate magician that is John Carney.