May 2005
Reviewed by Simon Shaw 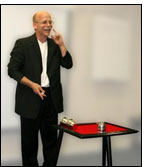 On Friday 27th May 2005, the Ipswich Magical Society were lucky enough to host a lecture by Michael Ammar.

The lecture was everything you would expect from one of the biggest names currently in magic. It was nothing short of brilliant and one of the very best magic lectures I have ever attended.

The lecture hall was filled to the brink not just with members of the Ipswich Society, but also visiting Magicians from all over East Anglia and I can honestly say that for the week following the lecture my phone didn’t stop ringing with people thanking me for organising it, and telling me how wonderful an experience it was.

Michael started off with a brilliantly choreographed two phase routine, that began with a very magical production of a wine bottle, and culminated in the bottle being used to push a half dollar into. Incidentally the special convincer he used for the coin in bottle was pure genius and not something I had ever seen before. It was one of those great gadgets that seemingly make the magic more impossible, and yet in reality actually make it easier.

As well as showing us his Topit and the subtleties that make it so invisible, the lecture wouldn’t have been complete without him demonstrating his cups and balls routine and he didn’t disappoint. Oh boy did he not disappoint. It is something I will never tire of watching and seeing it performed by the man himself, just a few feet away from me was like watching magic at it’s purest.

Other things he performed for us included his floating borrowed bill. Again a Michael Ammar trademark effect and hearing him discuss all the little nuances that makes this work so well just made me want to go straight home and try it out for myself.

Frankly, I would have been happy with just watching Michael perform magic all night long. The fact that this was also a top class lecture with insights from a guy that has been at the peak of his profession for many decades now made it into a real night to remember.

It should be said that Michael must have been absolutely shattered by the time he actually arrived for the lecture as apart from the long drive down from Hull earlier in the day, he had inadvertently managed to fill his diesel car up with petrol, and had consequently spent much of his travelling time trying to sort out the mess (all this after he had given up his day off to lecture for us in the first place!)

He arrived for the pre-lecture workshop with minutes to spare, and yet through out the whole evening he still he seemed fresh and totally on form, the mark of a true professional if ever there was one.

As well as a top class professional magician Michael Ammar is also one of the friendliest and most helpful guys you are likely to meet. I am already looking forward to seeing him lecture again next time he visits England. If you get a chance. Don’t even hesitate.