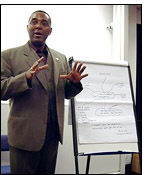 A lecture theatre at the University of Durham Queen’s Campus played host to about twenty eager magicians from all over the country who had come together to share in a very special event on 1st June 2006. Michael Vincent, introduced by the current President of the Middlesbrough Circle of Magicians, Richard Cuthbert, stepped up at the front of the stage to applause from those gathered, and introduced himself. From this moment on, we were lucky enough to be present for one of the most fresh and inspirational experiences that can be found within the magic community at the moment. It was a date on the calendar which had been widely anticipated, and we were not disappointed. Michael’s lecture deviates from the normal format of a magician’s lecture, in the sense that rather than demonstrating a string of effects and then explaining their working, he uses a few set pieces to illustrate some very profound strategies on Audience Attention Control (you might know it as Misdirection).

The evening began with a routine of cards and coins which was received with generous amounts of applause, a feat rarely accomplished at a magic club! The sheer grace and skill used within these routines demanded admiration, no matter where your interests lie. The subtleties that were employed, and later explained, were ingeniously clever, and once Michael began to perform (even though the effects that he performed were nothing new) he created a truly magical atmosphere. With so much saturation of the same magic being performed over and over again on Television, it was truly refreshing to see a performer whose skill was measured by the amount of thought and work that had gone into his performance, rather than how “different” they could be. Michael’s technical brilliance was shown by the way he manipulated his props and the way he manipulated his audience’s attention. Although subconsciously recognising the skill and effort involved within these routines, it was not until Michael explained them and you began to really understand what made them work and why, that you fully appreciated the value of Michael’s philosophies.

After a short break, Michael began the theoretical side of the lecture using the routines he had shown us to demonstrate how to use Audience Attention Control to its full potential. Michael explained how theories from Tamariz, Slydini, Alan Alan, and Tommy Wonder (to name but a few!) had had a profound on the way that he viewed magic, and from this process he had arrived at his own personal philosophies regarding Audience Attention Control and its proper applications. Michael emphasised the importance of taking advantage of the rhythm of Tension and Relaxation, and by doing so you can make your “dirty work” invisible, despite the fact that it happens directly in front of the audience. We all understand the importance of technical skill and presentation, but Michael’s thinking highlights the importance of how these two aspects of performance should be inter-locked and not tackled separately.

Michael had obviously spent a great deal of time putting this lecture together as it was well structured, thorough, and held everybody’s interest throughout. The use of the power point presentation meant Michael could visualise his philosophies, making them a lot easier to explain and teach to his audience. I had the distinct impression that Michael could have spoken on the topic for several more hours than we had that evening, but even so, he covered everything that need to be covered and even provided us with further reading on some of the topics or ideas that he hadn’t had time to go into fully.

Despite tackling this topic from a close up perspective, Michael’s theories could be applied to any discipline found within magic and overall, I would say that this lecture was the most valuable that I have ever witnessed. The lecture is available in DVD format from Michael’s website at www.magicofmagic.com under the Magicians Only section but if you ever get the chance to see him in person, don’t pass it up; The Tapestry of Deception will change the way you think about magic, and if you apply what Michael teaches you will become a better magician, it is that simple. Personally, I have come away from the lecture with a new passion. Not to learn new tricks, but to make the effects I already know more effective, by applying what I learnt and using Audience Attention Control to it’s full potential.

Magic Clubs:
Michael is available to present this ground breaking presentation.
For all enquires call 0207 286 4523.