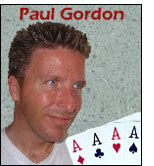 Paul Gordon delivered a first class lecture to members and guests of the Hitchin based club, Magical Mayhem, last Thursday evening. What a treat it was! Kicking off the formal part of the evening at 8.00pm, Paul entertained, instructed and explained effects from almost all of his publications, which were of course on sale together with his other marketed effects.

All questions were answered in full as we were treated to some of his classics and newer handlings of some of the older effects. These effects were described as a magician's arsenal of card effects that stun both, laymen and women. We also witnessed that they do just that as, shortly before the lecture started, members of the public, in The Sun Hotel, were given an impromptu show that left them stunned. To be fair, even some of the magicians present couldn't wait for the lecture to start and learn the secrets behind these effects. They were not disappointed.

With the formal part of the evening finishing at about 11.00 pm, one-to-one tutorials began in a much more relaxed atmosphere and over a drink. Paul went onto expand on explanations touching on the real detail and nuances behind each effect. At the end of a tiring day for Paul, he remained as ever patient and only closing the session when the last die-hard wandered home in the early hours!

Paul gave us an excellent lecture, and very good value for money. Magical Mayhem heartily recommends him to other clubs.