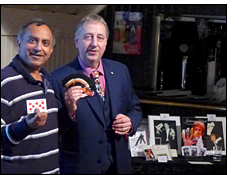 Anyone around in the 60s and 70s would surely have seen the magic of Johnny Hart. With his jaunty smile, flame red hair and immaculate manipulative magic, not just with cards but amazing barehand productions and multiplying of live budgerigars. Who could forget the budgie that climbed out of Johnny’s tail coat top pocket.

Magical author Steve Short has researched, through press and TV records, video tapes and personal interviews, Johnny Hart’s life. All to be published very shortly in a fully illustrated hardback book that is certain to be a valuable addition to the biographical records of the greats in magic.


Steve took us on a fascinating journey following Johnny’s life and career from his birth, in Lytham St Annes, in 1943, to his early shows in Preston and his entry, in March 1961, into a brand new competition for boys (later girls were allowed!) instituted by The Magic Circle 'The Young Magician of the Year'. Johnny won the title, assisted by his brother Peter.

Spotted by Harry Stanley and taken under Harry’s wing as manager, Johnny’s magical career took off. Steve had assembled many photographs and video clips which showed the development of Johnny’s act and how he really became an overnight sensation. By October 1961 he had appeared on Sunday Night at the London Palladium, followed later by appearances on the Ed Sullivan show. By January 1962 he opened in a 12 week season at London’s Pigalle Club. And as they say, the rest is history - all recorded by Steve in what promises to be a great read, of which his talk, interspersed with great anecdotes and some tricks too, proved to be a highly entertaining introduction.