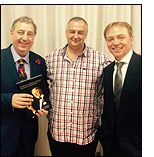 The Nottingham Guild of Magicians welcomed Steve Short and Scott Penrose to the guild on 18/06/2015. The evening started with Steve Short presenting clips of Alan’s life as a magician. Steve’s enthusiasm of all things Alan Shaxon shone through when talking about the days of Robert Harbin, John Wade and the double act with Anne, through to his days as the president of The Magic Circle and their 100 year anniversary. One of the highlights of the first half was a key point in Alan’s television career, all I really need to say is “Eddie Spangle and Monique”. The presentation was full of anecdotes and photographs which were not only interesting to see, but, the way they were presented instilled a passion and enthusiasm to perform and achieve what each magician has set as their goal to achieve in the trade we all love.

The second half was presented by Scott Penrose and was all about Alan’s tricks and secrets, It started with a trick that ensured everybody was speechless no matter how many times it had been performed: Aerial Fishing. Followed by a very well composed rabbit in the hat routine coinciding with a slick disappearing die routine which marred into a perfectly executed 5 minute performance. This was followed by the very impressive Confabulation, The Ultimate Nudist Deck, Headline Prediction and Card in Whisky Bottle. It was performed with a kind of zeal and intensity that ensured that you couldn’t keep your eyes off the performance.

I never had the opportunity to see Alan Shaxon perform live only on videos/DVDs, TV and YouTube. It was great to see some of his trademark tricks performed. Steve and Scott did so with the kind of professionalism that I believe (through watching clips) Alan would have been proud of. I would highly recommend this lecture as something that is not only in its execution well put together but interesting and different to any other lecture on the circuit at the moment.

© Dean Grimshaw, Publicity and Marketing, The Nottingham Guild of Magicians