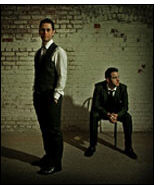 The Evening with The Vox Brothers promised to be a spectacular and interesting event. And so drew a packed audience which left our club bursting at the seams.

The evening was divided into two halves. In the first, they gave an example of their performance and in the second, they gave explanations of the effects presented. This proved to be a successful format, as it gave an opportunity to feel the magic as if watching as a lay person, and then become informed about their techniques.

Rob and Clint have been working together as The Vox Brothers, a two man mentalist act, over many years and their experience showed in the presentation of their performance. Their first routine involved a definite non-stooge (in other words, me!) and demonstrated that a blindfolded Rob was able to ‘divine’ a chosen colour and day of the week. Then followed a variety of ‘thought transference’ effects, examples of mind reading and dangerous stunts. The first half closed with their version of ‘The Spirit Cabinet’. It involved Rob being tied by spectators to a chair and each time the screen was closed the ‘spirits’ did their work! Having been fascinated by the works of The Great Falkenstein and Willard, this effect was without doubt the highlight of the evening.

In the second half much discussion was given to coding principals, explanations of routines and advice about performing this type of act. The explanation of the spirit cabinet was given in such a way that we were told about methods used in traditional versions and these were demonstrated.

All in all, it was a fantastic entertaining night from The Vox Brothers.