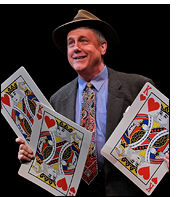 Just occasionally you come across an event that really shouldn’t be missed. And one of those happened at the start of the weekend of International Magic’s 40th anniversary with a ‘show and tell’ by Harry Anderson.

Now it’s possible that many of the younger generation have never heard of Harry Anderson. At one time he was a household name in the US, playing the part of the judge in the sitcom Night Court. Although it was shown over in the UK, it didn’t achieve the status of Cheers, which is where Harry – playing a part in a couple of episodes – got the call to audition for Night Court.

However it was as a comedy magician that Harry Anderson started his career; and his persona of the loveable con man that brought him to the attention of television executives. As a magician, he supported many of the top acts in the business as well as subsequently topping the bill himself. He was therefore undoubtedly one of the major names in American magic at the end of the last century.

A US magic institution therefore; but not one over here. Apart from an appearance on one of John Fisher’s television specials (his spot was never shown!), this was his first appearance in the UK or indeed Europe. Unless you had looked at clips on YouTube, or perhaps read Mike Caveney’s book Wise Guy, the audience had no idea what to expect. I certainly didn’t.

The format of the evening was straight forward. First his professional show – lasting around an hour; and then the explanation of what we had just seen. Hard to think of a better scenario.

If you were expecting plenty of tricks for your bucks you would have been disappointed. Anderson opened with his Monarch Monte, a stage version of the Three Card Trick, memorised a pack of cards, did a comedy strait jacket escape and closed with the Magic Square. And that was it, trick-wise. It can’t be said that he performed those flawlessly. He lost his way a little in the Monarch Monte and slightly fumbled a deck switch.

But it really didn’t matter – partly because he was so laid-back and happy to reference when things weren’t going entirely to plan (“this might be happening on purpose...”); but mostly because the tricks weren’t really that important in the scheme of things. It was the chat, the engaging personality and the attitude that we had all come out for a good time that carried it through. Indeed probably the highlight of the show was his relating how he had ‘eaten’ Skippy the guinea pig on Saturday Night Live; and his follow up apology – “Well all I can say is, when it comes to nutrition, ounce for ounce, nothing beats Skippy.”

Many who had seen the show decided against attending the lecture afterwards – which was understandable. None of the tricks would have fooled a well-versed magician. At the start of the lecture I, too, was half wishing I had opted for the bar, as he began to relate his life story. But then when Anderson started talking about being aware of Instantiation and Conceit in the construction of your tricks, my ears began to prick up: partly because I had never heard of the word Instantiation; and Conceit only in reference to the attitude that most magicians I know display when performing.

Also, as he explained the show in detail and one began to realise that everything had actually been carefully thought out and planned in advance, my admiration for him began to increase. For instance the Skippy story was part of the show – and yet when he had told it, I thought it was something he had just improvised for us as magicians.

In a similar way, everything else was tightly scripted (Anderson isn’t one of those who believes in ‘working in the moment’), building up to the unexpected climax of the Magic Square. Indeed it was only during the lecture that you appreciated you had actually been fooled with the latter after all. I, like plenty of others, had dismissed the Magic Square because we all know how that works, don’t we? But Anderson had constructed it on a huge sheet of paper which was pre-folded into sixteenths: so it was only when he revealed it at the end that you even know it was a Magic Square for sure.

Furthermore the number chosen was a genuine free choice and was 125. The memory work in that must have been phenomenal. It turned out that it was pretty much zilch; and it was all set up by another prop introduced earlier that didn’t appear to have anything to do with it.

Overall it was one of those rare performance and lectures that resonates even more as you think about it afterwards (most lectures are the opposite – you get carried away in the moment, buying the prop or lecture notes, only to regret the purchase the very next day).

To give but one example: during the show he had a man and a woman couple up to assist him in his strait jacket effect. During the preamble, he kept saying how attractive the man was, almost to the point of chatting him up. Later on, however, he contrived a situation where his head was nestling in the bosom of the lady. If he had ‘hit upon’ the woman from the start, this would have come across as lecherous. As it was, it was very funny – and the woman thought so too.

There were plenty more of those type of insights, either explained by Anderson himself or ready to be salvaged by anybody putting their thinking cap on. The overall result was that it was the undoubted magical highlight of my year: a master class in comedy magic.