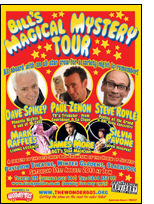 With an impressive line up of acts on board this was a packed evening of first class entertainment dedicated to the memory of Bill Thompson, with proceeds from the show going to Paul Zenon's Wonderbus charity.

Paul Zenon hosted the show with his direct and humorous approach as well as performing a number of routines throughout the evening. He started the show with his comical Del Zenon fruit based routine, and recalled some of his fond memories of his early years in Blackpool working alongside Bill. Next, Paul presented his cut and restored microphone cord routine before introducing Mark Raffles.

Mark continued the comedy, showing us classic magic with a comedy twist as he presented his serene Linking Rings routine that built into multiple comedy moments where his jacket, glasses, a hacksaw, and a chair all became inexplicably linked to the rings.

This was followed with a very different style of comedy in the form of the "Fat Folkers" aka two members from comedy ensemble Slaughterhouse Live, who presented a lively performance involving audience participation with songs and wordplay.

Next was Russell Brown flowing with enthusiasm and a jug full of orange juice. Using a paper orange juice carton he poured milk, chocolate milkshake, Pepsi, Iron Bru, Lilt and beer into empty cups, before ripping the carton open to show it empty. The poured drinks were then distributed amongst members of the audience who consumed their chosen drinks. As the drinks were finished the audience showed their appreciation with plenty of applause.

Paul Zenon continued with a drinks theme combining centrifugal force and comedy as he spun a pint of beer precariously above his head before downing in one.

Circus performer and hula hoop dancer Silvia Pavone then lit up the stage with poise and precision as she danced with illuminated hula hoops.

Next, Dave Spikey presented some sharp and topical comedy about the ambiguity of the English language with a series of puns linked to signs, newspaper headlines, magazine articles and adverts, culminating with a Lancashire based story involving hotpot and rapturous applause.

After a short interval the show resumed with Paul Zenon presenting a bowling ball routine, before introducing talented juggler Thomas Bounce who gave a superb display of speed and skill with numerous juggling balls, in a style which has developed enormously since he appeared on Britain's Got Talent.

Next was Steve Royle with his inimitable style of comedy combined with juggling. Steve has a comedic manner that plays brilliantly, and he kept us all laughing and appreciating his juggling as he finished with a Spanish theme that involved juggling three full size guitars.

Paul Zenon then presented a great knife through jacket routine with many comedy subtleties before introducing the final act of the evening. This was magnificent magician James More who gave us a slick display of dexterity and style, presenting magic in a manner which is very much appreciated by audiences around the world.

This was a great night of entertainment, raising money for The Wonderbus charity, and a fitting tribute to the memory of Bill Thompson, with an array of talented performers supported by many friends of Bill who made the evening possible.