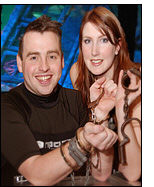 Danny Hunt presented one of the most exciting escapes ever devised at the Sea Life Centre, Blackpool on Tuesday 29th January. Called the "Death Tank" it nearly became exactly that as Danny struggled to pick one of the padlocks which had got filled with water and would not open. Danny Hunt and his lovely assistant Annette began their magical career as Amethyst illusionists but have now developed into one of the leading Escapologists in Europe.

Danny is a young, good looking, articulate escape artiste with modern ideas and the press and television love him. The Sea Life Centre was packed with media people as Danny explained what was to happen. A tall metal gantry had a winch at the top. Danny was securely shackled lifted up by his ankles via the winch then lowered into a clear Perspex tank which had a secure neck stock locked in position with 4 padlocks. Whilst in this situation blue water from the Sea Life Centre was being pumped into the tank. Within a few seconds the water had engulfed Danny's head and he could not breathe. He escaped from the shackles with no problems and the first padlock was picked with a borrowed hair pin. By now the media people, including me were getting very edgy. The second padlock just would not open due to water having got inside it. Annette was just about to perform an emergency rescue when suddenly Danny flicked the padlock open to huge cheers and a 3 minute ovation from hardened press people.

The stunt was featured on various television channels and got full page coverage in many newspapers.

In the second of his highly dangerous escape stunts for Blackpool’s ‘Showzam’ Festival, Escapologist Danny Hunt from the UK’s Amethyst Escapology & Illusion duo faced a self devised coffin style escape on Thursday 7th February at the Olympia Arena at the Winter Gardens, Blackpool.

The escape revolved around a metal coffin/casket which was anchored at either end by ropes attached to heavy duty pick up trucks. Once secured inside the box, Danny would only have the time taken for his crew to secure the front doors of the box and his partner Annette to walk to a signal point in front of one of the pickups and wave a flag, to make his escape, before one of the vehicles raced forwards tearing the box and Danny apart.

Danny was chained by the neck, wrists and ankles inside the box using padlocks from the local locksmiths. The scene was all set after a rather nervous looking Danny explained what was to happen and stepped into the industrial looking contraption.

The onlooking crowd of spectators and press watched in nervous anticipation as the scene unfolded. All looked to be going well as the final locks were put in place on the box and Annette walked to the signal point. Suddenly an emergency flag appeared from within the box to signal a problem but it was too late and the pickup truck raced off down the length of the arena to the sound of a loud explosion detonated behind the coffin, tearing the coffin two.

The room set in panic as the medics and Annette raced after the truck. Only to find that Danny had successfully made his escape and had allowed himself to be whipped at high speed across the Arena inside the half of the coffin that had previously contained his chained up legs. The crowd showed their appreciation at this daring stunt by the huge cheers and applause that followed.

This escape, by Danny’s own admission had been a very dangerous stunt to perform and gave testament to his commitment to becoming one of the UK’s most daring escapologists. It was a tension packed spectacle with a raw feel to it. All of the showbiz glitz had been taken away and it harked back to the publicity stunts performed in Houdini’s heyday but with the added contemporary style that Danny and Annette expertly gave to it.

He has been performing escapes for the little advertised ‘Showzam’ festival in Blackpool but it was with his last stunt that his sanity must surely be questioned. Tuesday morning saw him at the Louis Tussauds Waxworks, before an audience of press and lay people, attempt an escape from the ‘Table Of Death’. This prop has been featured in many magic shows, even exposed by the masked magician, but this version has had all trickery removed and is now a genuinely terrifying prop. Trust me, I know, I was there.

Danny started the morning (yes, he did all this before lunch) with a guillotine, a nail hammered up his nose and a hatpin through his neck. Is he starting to sound mad at all yet? Then he was fastened to the table with genuine chains, padlocks, handcuffs and leg irons. While this was going on the bed of spikes wobbled precariously above him held in place only by the hair trigger attached to the timing device. Had this fallen…well…you can only imagine. I helped to lift the thing into place so I can testify to its weight and sturdiness. It was at this point I wondered if we should have him committed.

The timer was started, the curtains closed and the wait began. There appeared to be a lot of struggling and grunting going on as the clock counted down from One minute thirty seconds, a time in which Danny was sure he could escape. Almost too quickly, the time ran out and the bed of spikes slammed down. The room was silent for what seemed like an age, before the curtain was pulled back to reveal what appeared to be an unharmed escapologist. I say appeared to be for a reason. The last time Danny performed this escape, almost Seven years ago, he had an accident and this was to be repeated today.

Whilst he stood to take his applause, he appeared to be a little unsteady on his feet. A paramedic was called and we could see one of Danny’s shirtsleeves was soaked in blood. Annette, Danny’s partner, seemed very concerned so we knew this was real. Indeed, the paramedic also confirmed this as he ripped of Danny’s sleeve to reveal a very unpleasant looking gash, he had apparently been impaled by one of the spikes and almost had to rip his arm free. Danny was patched up sufficiently to speak to the press and onlookers before being taken away for more attention.

The event did it’s job and garnered much publicity in the press, and secured Danny and Annette the opportunity to present more challenges during next years festival. But it just confirmed one thing for me… Danny Hunt is mad.