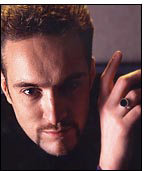 "Don't give away any specifics. It makes life a lot more playful, that way..." These were Derren's parting words to his delighted audience, and in particular to any gentlemen or ladies of the press. So let's begin then, by considering what he didn't do. First, and most obviously, he didn't do anything remotely like a magic trick - if you are familiar with his TV shows, that won't be a surprise. He also used no mood music; had no scantily clad female assistants (except fortuitously, from the audience); barely any props; but even well into the second hour, the rapt attention and silence was such, that you could have heard an ITR thread snap.

We've begun at the end, so let's continue. The show is in two halves, with the second one described, quite rightly, as 'much darker' than the first. This has little to do with any lighting involved (also minimal, but effectively used), but everything to do with content. In the hands of any other performer, one would probably label this as 'a seance' and leave it at that. However Derren's persistent - and impressively consistent - approach to his performance, an approach which we might rougly call, Retain Your Cake, While Simultaneously Cramming Down Monster Gobfulls of the Stuff, means it isn't that clear-cut. Yes, there is what he calls a Ouija Board involved - complete with halftime warnings, for the faint of heart. There are copious references to and apparent 'encounters' with the deceased, whom we are encouraged to meditate on during the interval. There are - well - manifestations. Everything though, is hedged round with psychological explanations, framed and indeed dramatically punctuated by explicit details of the deceptions involved: both his own and those of historic 'mediums'. Yet the audience leaves no wiser than it arrived. The overall effect - carefully planned, along with his each and every twinkle and footfall - is not one of confusion, but rather of a profound and enjoyable bafflement. The Mighty Oz flings back his curtain, only to reveal another curtain beyond.

In an intriguing occurrence, Derren chose two different women at quite separate times to be his assistants. They turned out later to be sisters (coincidence? - you decide...) and were uniquely placed to comment afterwards on how it felt to actually participate in some of his mindwarping experiments. Both had clearly been in some kind of altered state while on stage, although far from 'hypnotised' or any kind of supernatural experience. Both went away firmly convinced not of the existence of ghosts, but rather of the capaciy for manipulating the human mind. With hints that this is more the direction he will take in the TV specials scheduled for next year, we can savour the prospect of a whole new arena receiving the Brown Treatment.

So on then, or rather back, to the first half, an altogether different experience. Where the Derren of Act II is mainly a serious investigator, apparently surprised by the success of his own experiments, the Svengali of the opening half is a playfully cocksure player of mind games - games which the spectator senses they cannot win, but delights in playing; and in being played with. The audience as a whole were teased, tested and found wanting quite early on, in what appeared to be a simple guessing game over a coin. Money is indeed on offer at various points, including a substantial amount which is repeatedly retferred to; yet somehow we never feel the Brown bank balance is in serious jeopardy. At times some of the more familiar Mentalim iconography is deployed: envelopes, clipboards and whiteboards all make an appearance. Some classic effects receive a fresh and newly plausible treatment - although actually none more so, than in a kind of Reprise, at the very end of the show.

Derren performs staples of his cabaret act, again somewhat reworked and with even more of an impossible, hands-off feel than before; most prominent among these are Lift and Reminiscence. For readers familiar with those effects, no explanation is needed, as Dunninger once said. For those of you not aware of them, go and see them - and the rest; and prepare to come away very seriously impressed indeed.

Derren continues at the Tobacco Factory in South Bristol until next Saturday.