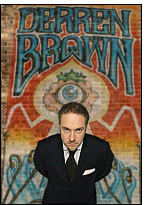 I drove from Luxembourg to Tunbridge Wells last Tuesday to see Derren Brown on tour with his new show 'Something Wicked This Way Comes' and I can safely say without hesitation that it was worth every kilometre! It's Sunday today and I'm still smiling, still wondering, still pondering and, best of all, still talking about it.

What a show! And what showmanship! A consummate performer – and thankfully so, because the whole lot could so easily have fallen apart had it not been for the unparalleled skill with which he kept the audience consistently entertained, on their toes (some literally!), fully attentive and, we must humbly admit, quietly 'manipulated' throughout.

I can only describe the evening as a sequence of melodies so deftly 'played' that it wasn't until the end that one became aware of the countermelody which had been running 'underneath' all along. A clever arrangement indeed, delivered with such confidence and ultimate passion that little was left to criticise.

From the downright silly to the downright dangerous, from the 'I could hazard a guess at how he pulled that one off' to the 'I know it's going to hurt my brain thinking about that one so I'm not going to bother' – the show had a little of everything and something for everyone, with varying degrees of comfort and discomfort or, in the case of my friend beside me, worry! (Oh, what fear a crumpled piece of paper can engender in the right hands!)

What was similarly impressive – and very refreshing - was the feeling that his audience (circa 1000) was never simply a sea of faces, but very much a collection of individuals with whom he communicated on a one-to-one basis with a sickening charm that leaves one unsure as to whether to kiss him or slap him!! (Important note: I speak for the ladies only!)

For me, what clinched it was the distinct LACK of magnificent, custom-made, elaborate magical 'resources'. How wonderful that there are still people around who'll put in the hours of thought and hard slog so that people like me can simply sit back and lap it all up without being blinded by fire and brimstone and a vast array of visible trickery. How wonderful that there are still those who rely on performance rather than props, on delivery rather than pure end-result. How marvellous to enjoy a mere handful of props and, to be crude, a truckload of talent.

P.S. One unfriendly marker pen infused a beautiful surge of 'humanity' into the midst of so much tension and suspense! I'm desperately hoping it was either 'planned' or it'll have been kept in! As a performer, it's probably worth remembering that the odd 'intentional' hiccup can be a very useful tool. Anyone reading this will probably already know that, but it's certainly something else that I've taken away with me – and I'll use - so thanks for that, too.