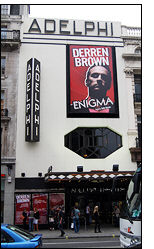 Derren Brown wasn't the only one reading minds on Wednesday night at the opening of Enigma at the Adelphi Theatre in London's West End. The whole audience knew exactly what each and everyone else was thinking, which was "how the hell did he just do that?!" The genius of Derren's work is simple - he's put the magic back into magic - and audiences love it. He's happy to blow their minds, and they are happy to have them blown!

As the lights went down the audience buckled-up in anticipation - ready for a ride that had more twists in it than any corkscrewing roller coaster I've ever been on. And whereas magicians in recent years have become almost afraid of 'fooling' their audiences, Derren revels in it. He knows that some love trying to fathom out what on earth is going on, how it's all done and if it's "for real". Audiences like to think and to be stretched, by a performer who really knows how to engage with them. They want to be part of the show, and they want to have fun. Derren delivers in spades. He's mastered his art, without becoming a clever-clogs in the process (the downfall of many).

At the after-show party an industry insider whispered in my ear that he thought Derren was the greatest magician performing in the world today. He probably is! If you've never seen Derren Brown live then do make the effort to see this show. It's pure theatre. The Adelphi seats 1,560 and Enigma runs for 30 nights. Collaborator, co-writer and director Andy Nyman's brilliant theatricality is evident throughout. Derren Brown Enigma is presented by Michael Vine, Andrew O'Connor and Corrie McGurie for Objective Talent Management Ltd. For theatre information, and to book tickets, visit www.adelphi-theatre.com.