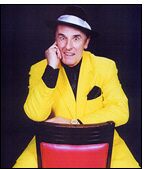 This is a Duggie Chapman traditional family pantomime, under the direction of Freddie ‘parrot face’ Davies, two names familiar to many magicians.

Whatever you think about Mel Harvey’s self publicity machine you have to admire his stamina in continuing to promote himself. I made the 230 mile return trip to ‘hiss and boo’ together with the rest of the near to capacity audience….I was not disappointed. In fact it was a double pleasure as unknown to me at the time of booking there was another magician in the cast.

Dave Short M.M.C. as ‘Sarah the Cook’ was a wonderful pantomime dame, one of the best that I have seen. He had 10 changes of costume all which were amazing and his lines were delivered with just the right amount of ‘campness’, together with Mel as ‘Idle Jack’ he was on and off stage throughout the entire two hour performance.

Mel immediately connected with his audience and used this to great effect especially as a party of scouts were in attendance and ‘Arkala’ became the ‘butt’ of his jokes.


Wobbly wand, monkey bar, draw-box with fur rabbit production got him off to a great start. There were some great sketches using musical instruments with more magic from Mel, multiplying wands, disappearing dice, in the ten minute ‘Harry Potter’ spot with a young boy from the audience.

In this day of technology it was heartening to have real live musicians to provide backing etc. There were a couple of dead spots with scenery changes and no doubt these will be eliminated as the run gets under way. The smoke machine operator was over zealous in his use of and being half way back in the audience I just about escaped being choked to death, we know it is not toxic but never-the-less uncomfortable for those closer to the stage.

I was quite surprised to see a male playing the part of Dick Whittington….what-ever-next……..a female playing the part of a dame? Idle Jack returned with unequal ropes which was a perfect link into his song-sheet item based on the worm…in ‘Wiggly Woo’. This interlude enabled the complete cast of 23 to change into their final costumes which were absolutely fantastic, colour themed in gold, black and yellow.

Magic has always played an influential part in traditional family pantomimes and I am sure there must be many other magicians out there fulfilling this role….let’s hear about them.