An Evening of Fine Cuisine and Conjuring 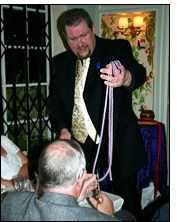 It was a super evening, the Restaurant has no concept of portion control, all the servings were more than generous, to say the least! First course of soup - you'd expect that to be in a bowl? Wrong - it arrived piping hot in a huge tureen, one for each table, and I freely confess I had three bowls before remembering there were still two courses to follow. Main course of Chicken Supreme with assorted veg (help yourself from the huge container plonked down on each table!) and a dessert choice of either a Crumble or strawberry cheesecake roughly the size of Rutland - this time shared, not one for each table! Served with cream, ice cream or custard. Or all three if you wish. I wished, but didn't include the custard!

Before and between courses, Dave Taylor (www.davidtaylormagic.co.uk) toured the tables with some very nice close-up routines, followed by amazed and delighted reactions every time. You could see the atmosphere becoming more and more relaxed as the evening went on and not just because of the complimentary wine served on arrival; Dave's style is very gentle and he obviously enjoys his magic as much as the audience. After coffee and mints, Dave did what was supposed to be about half an hour of cabaret but did longer than that and even after the official close was still doing rope and card routines - real value for money! The cabaret routines involved an array of high quality classic props, crafted in rare woods, mostly from the Five of Hearts range which set the scene for classic effects. Apart from very skilful rope effects, there was Smash & Stab, a superb book test (Slate of the Mind) and an appearance of White Star which on the reveals, I looked at the other guests and the look on their faces was priceless - just what any performer hopes for.

All in all a great evening, I was surprised to hear it was the first time The Grand Union had tried this particular theme, but I know it won't be the last. Assuming my waistline can stand another bashing, I'd like to be at the next one!