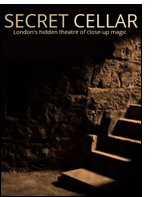 On this pleasant springtime evening it was made clear to the two dozen patrons who’d paid to fill this quaint subterranean venue: there was a doctor in the house.

Will Houstoun makes much of his doctoral status, as well he might: it is a singular achievement to have gained one of, if not the first, doctorates on magical history. One of several smart pieces of theatrical thinking in evidence tonight, Will has built it into the fabric of the this hour-long parlour show, from the billing matter through the introduction to the scripting.

It is, in so many ways, an evening of surprises: which is as it should be in an evening of magic. But these included surprises beyond the natural reaction of laypeople to the excellent display of magic performance and skills you’d expect from The Magic Circle’s 2015 Close-up Magician of the Year.

Dr Houstoun’s CV, endorsed by his scholarly appearance, could well lead you to expect a rather dry, professorial style of presentation. Add that his approach is overt sleight of hand with cards and coins, from a performer who is clearly a mechanic who takes his art very seriously; that his scripting is largely narrative; and you can be forgiven for expecting a somewhat heavy ride over this sixty minutes.

In fact, this was a delight from start to finish. True, his approach to bringing sleight-ridden card and coin magic alive for an audience is somewhat intense and verbose - but it’s also rather charming, even endearing. Will clearly takes his magic seriously; this leads him to invest an importance in everything he does, and so you do too.

Here’s a further surprise: who knew what a fine storyteller the Doctor was? The spine of the show is Will’s fond recall of some of magic history’s interesting and unusual performers and authors. For each luminary he has an anecdote, which is then brought alive by an effect. This is further animated by a running gag that involves the thoroughly attentive audience, while acting as the through-line that glues the show together, culminating in the show’s closing device. When I checked my watch at the end I was taken aback at how quickly the hour had passed: a testament to how much Will had engaged us, and another of the evening’s surprises.

And it’s all so very, erm, English: from the precise enunciation, the steadfast flow of narrative and the unerring politesse. All presented with an elegance and steady pace that does not pall, thanks to his engaging performance style. You feel this material is Will’s offering to the audience, whom he hopes will savour it as much as he does; he is clearly enjoying himself performing and watching it all unfold. I’m sure the audience recognised they were watching a master of his craft demonstrating clean, classical magic: this was a rapt and appreciative crowd who seemed fully prepared to entrust their time and belief in him. Ironic this, since the very premise of this show is to constantly encourage the audience to question the veracity of what they are hearing.

As to the magic, there’s a further surprise in store; a mix of the sleight of hand for which he is becoming renowned but with a surprising preponderance of old-school apparatus. The latter include such faux-Victorian delights as a drawer box and ball vase. Whilst this reviewer found them a little lightweight magically (particularly given the more hard-core sleight of hand that we have come to associate with Will perform) they serve to illustrate his anecdotes – which become the star of the show rather than the magic: perhaps the biggest surprise of the evening.

That said, the magician in me found the anecdotes-to-tricks ratio a tad high: I felt that tightening a couple of the lengthier stories and adding an extra effect would have made for a better balance overall.

A pared-down Cups & Balls gave way to a two-card transpo routine that was nicely pointed; following the wooden props mentioned above, he presented a very clean Gypsy Thread – a crowd-pleaser indeed. But the magical highlights are his own Coin 0.5 and Order and Chaos. The former takes the 3-Fly concept – in mortal danger of being overworked by now – and strips it back, simplifying the plot, eliminating the to-ing and fro-ing that impede the flow of so many such routines and in the process boosting its impact. Apart from being a delight to watch, at last this effect seems to make sense.

In his closer, Order and Chaos, Dr Houstoun wrings situational laughs from this craftsmanlike routine, in which a convincingly, well-and-truly spectator-shuffled deck ends up in a predicted sequence after an up-the-garden-path moment that framed the astonishing climax beautifully. It’s a strong, well constructed closer, and the Doctor wrings every piece of reaction from it.

This was the first night of Will’s shows in the week; hence it had the slight feel of a work-in-progress: part of its charm, as it turned out. It’s evident a lot of thought has gone into the structuring and persona in this show; the joy of it is that it is pure Houstoun – you could not imagine anyone else carrying off this difficult balance of the academic and the playful. This is where the potency of the show could well lie.

What Will now needs is stage time to bed his show in, find its true balance and rhythm and make it an important step in taking a magician’s magician and history geek and turning him into an understated but authoritative, and entertaining. magical personality. That stage time might well be achieved across the pond, because I have no doubt an American audience will find his precise, polite Englishness utterly disarming.

Incidentally, one of the evening’s many surprises was provided by the venue itself. The Vaulty Towers is a typical London bar just down from the Old Vic Theatre, in the shadow of Sir Ray Davies’ Waterloo Station. Its ‘Secret Cellar’ is just that: a huge, filled bookcase that slides over to reveal a concealed opening, giving way to steps down to the hidden cellar room.

Appropriately decorated in the usual studied casual bohemia of such louche places (there speaks a true out-of-towner) with a capacity of around 30 punters, it provides a charming setting that absolutely complements Will’s style of show, part of a short season of such shows from the likes of Chris Dugdale, Laura London and Brendan Rodrigues. It is to be hoped the proprietors choose to open their vault on an ongoing basis – it could become a nice quirky venue for magic.

Until now the single moniker ‘The Doctor’ has tended to refer to BBC1’s infamous time-traveller. In the magic world we now have another who could well lay claim to it.