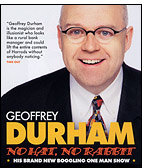 This is the third in the trilogy of Geoffrey Durham's touring one-man shows and as he says himself in his introduction: 'This is the one!' This show is closer, more intimate and more baffling than ever before, as we are guided on a magical tour of Mr Durham's thinking about and passion for magic, beguiled and enchanted on every step of the journey.

The first half is a wonderful mix of 'Classic Durham', including his acclaimed torn and restored newspaper, along with new additions such as a very funny and different version of cards to pocket and the nap hand, both unbelievably performed with brand new decks opened, shuffled and dealt by spectators. He closed the first half with his intriguing numbered blocks routine, which seem to change position on command. The performance includes some thoughtful changes of pace and a variety of effects rarely seen in this type of show.

During the interval Geoffrey could be found wandering around the bar and the auditorium amazing the audience 'under their noses' with 'the handkerchief with 5 corners', a rope routine and the appearing ladder, to name but three.

The second half opened with a jumbo magic square, with an unexpected kicker finish. We were also treated to a comedy prediction, a vanishing banknote, which turned up in the most unlikely of places, a novel effect involving a chair and a box, plus more of his 'Classics' including his presentation of the linking finger rings and the hydrostatic glass. This is just a mere taster of the variety of magic on display, which was lapped up by an appreciative audience.

Geoffrey Durham is an expert at ESP - Entertainment, Spectator-handling and Presentation. A great night out for the general public and a lesson in showmanship for magicians. This is a must-see show, 'No Hat, No Rabbit' - just sheer magic!