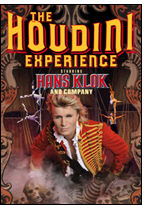 Earlier this month I got to sit down with master illusionist, his words not mine, Hans Klok for a little chat about his new show The Houdini Experience. I am an award winning (and highly modest) mind-reader who can't read minds, whose always loved magic, but illusions, just haven't excited me. Has Hans managed to change that with his first London show? You know what? I think he has.

112 years ago the London stage played host to Harry Houdini, the most famous magician of all time, and in this show Hans pays homage to this hero of magic with the most spectacular illusion show you could ever want to see. London hasn't really had a big magic show grace it's stages for some time, and with the art of fooling people at an all time high, now is the time to capitalise on it. I myself have my own award winning, multi 5 star mind-reading type show Fatal Distraction on at the E4 Udderbelly on the 29th May and 19th June, but I wouldn't be so crass as to mention that in anything that I write which has any reference to magic in it. Nor would I dream to mention that tickets are on sale now.

Anyway with that plug expertly shoe-horned in, it's back to the matter at hand, or should I say the matter at Hans. The Houdini Experience takes us on a travel through time and tableaux's visiting pirates, the 1700s, vaudeville London and Hans' bed. We're treated to an eclectic mix of incredible illusions all done in such a slick style and with so much pace and speed that you find yourself in an almost constant gasp.

This two-hour production zips along with a circus cabaret collection of international acts who could well have stolen the show and it's a testament to Hans and his team that they still manage to top these world class acts. Leosvel & Diosmani perform a homo-erotic show of strength sliding up and down a pole, the MG Team's deaf defying roller-skating display leaves your hear in your mouth but it's Duo You And Me's hand balance act and Zhang Fan slack rope stunt that feel new, fresh and above all an incredible example of what the human body can do.

These phenomenal feats of the human body remind us of what is potentially possible, but then Hans Klok throws your world into a spin as he dazzles and delights with some of magic's greatest hits. His presentation of Blackstone's floating light bulb is probably as close to real magic as you'll ever see, the constant vanishes and re-appearances from his Divas of Magic and tightly drilled dance crew are often repeated yet never really get old. The banter is somewhat lacking, but the charming foreigner manages to endear with a selection of cheesy gags and dodgy script. It's lucky we're here for the trick more than the scripts.

This is a big budget magic spectacle, with high production values that feels like it's straight out of the 80s and to be honest, that is exactly what you want from this sort of show. You want a man pouting from a man whose a cross between Boris Becker and Zoolander pulling a Blue Steel. You want sexy dancers, you want cheesy music, and you don't want anything new. You want a slick show that will mesmorise and fascinate the whole family and that is exactly what The Houdini Experience is.

This isn't a show about Houdini's life, this is a show about Hans Klok celebrating magic, you so often find yourself with laughter as your only response due to something impossible suddenly occurring in front of your eyes. It is a show of no ways and OMGs. It is quite simply a hell of a lot of fun and is big stage magic exactly as its meant to be. A real treat.

Hans Klok - The Houdini Experience runs at Sadler's Wells Peacock Theatre till the 25th March 2012. Tickets are on sale now.