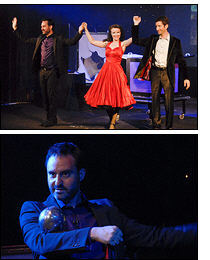 Paul Kieve is best known as a magical adviser but his role as magic consultant on the film Harry Potter and the Prisoner of Azkaban led him into writing the book Hocus Pocus. He has now taken some ideas from the book and transformed them into a stage show.

The format is relatively straightforward. Paul talks about a number of magicians, including The Great Lafayette, David Devant, Servais Le Roy and Chung Ling Soo, tells anecdotes about them, shows animated slides on a screen as illustrations and then performs a trick which is related to the performers in some way. Sometimes, as in the case of Robert Harbin’s Zig-Zag, the connection is very direct and historically accurate; other times, as in The Great Alexander’s Slate Trick, perhaps less so. Not that the latter matters one iota from the layperson’s perspective.

What is particularly impressive is the range of magic genre that Paul does: a number of illusions, assisted by Alexis Terry, are done both silently (including the original Okito version of the Shadow Box and a very fooling vertical levitation from Paul’s own repertoire) and talking through them (the aforementioned Zig-Zag); an excellent zombie is underscored by one of several pieces of original live music composed and played by his brother Daniel; and there are routines (chop cup and bending mirror, which was one of the ‘stand-outs’, amongst them) with more conventional patter. He even branches out into rhyme with the Chinese Sticks.

There are some nice touches which might even fool knowledgeable magicians. An effect of pouring water into three tumblers placed on top of one another, in which the top, the bottom and then middle tumbler sequentially fill up with different colour liquids, certainly puzzled me. Paul introduced this as a trick which didn’t make the final edit in the Harry Potter film.

Paul isn’t shy about name dropping in the show - but if Daniel Radcliffe had written the introduction to my book I would have done the same! However this actually reinforces Paul’s authority and knowledge of magic generally. The full-house audience of mixed ages appreciated that they were listening to an expert and the combination of learning more about the history and background of magicians and magic tricks, whilst simultaneously being thoroughly entertained, makes this uniquely different from other magic shows.