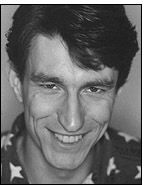 It’s a shame, really, that Edinburgh magician Ian Kendall’s most impressive coin manipulation is missed by the majority of the audience.

A coin literally takes off vertically from his outstretched palm, simply leaping into the air, to be caught 24-inches above. It’s a coin falling up.

It MUST be going up on an invisible string, thinks the audience. But, no. It’s done with pure muscle control. It’s a sight worth seeing, but Kendall’s dexterity is missed because the most captivating thing about his act is his disarming charm and excellent stage presentation.

He also has a gentle humour, preferring to make fun of himself rather than the audience. “Fourteen years ago, I started at the bottom. And I prefer it here.”

There’s the usual tricks involving coins and ropes as the act rattles along nicely, each effect blending into the next. This is mainly down to well-crafted routines and a thoughtfully constructed set, all of which makes for an enjoyable, fascinating and - more importantly - entertaining performance.

However, his Russian Roulette effect is what really captures the attention. Out of sight, two audience members switch and mix four polystyrene cups, under one of which is hidden a wicked looking spike.

By whatever nefarious means he employs, Kendall eliminates all but one by smashing them under his open palm.

It’s real edge-of-the-seat stuff that makes the audience flinch each time his hand smashes down. All the more impressive when you consider that it’s a trick which has brought a swift end to the career of magicians in the past – and an even swifter journey to the casualty department.

As Kendall points out: “If this goes wrong, it’s the end of the show.” And he’s not kidding.

Kendall instinctively understands that audience enjoyment is the key ingredient to any show – and he delivers it.