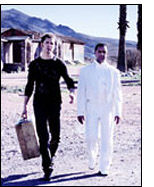 The Jarrett and Raja Show at The Hilton Hotel, Blackpool brings forth mixed emotions. There is a lot of this show that I like – a lot, but there’s just as much that irritates the hell out of me. And the funny thing is, the irritating parts could be easily remedied, improving the show exponentially.

Let’s start at the beginning. The show opens with the six dancers The Pussy Kat Girls, who during the evening worked very hard in both halves. They shared the first half with exuberant and vivacious singer Jodie Moore. Each time any of them stepped on stage they had a new and different outfit. Jodie especially looked like she would fit in any Vegas show.

The second half opens with two separate doors in frames on the stage. The Pussy Kat Girls perform a dance routine going in and out through the doors, so they are obviously concealing nothing. Our two heroes, Jarrett and Raja (Jarrett Parker and Raja Rahman), appear through the doors. Raja, a classical pianist goes to the piano and Jarrett goes into a pretty average sub trunk presentation with his girl assistant (I believe Nancy Troia).

With Raja on the piano we are then taken on a fun Cowboy sequence with Jarrett as the cowboy. The piano stool is taken upstage left, Raja sits on it, gets covered with a cloth and vanishes a la DaKolta Vanishing Lady. This is the first time I’ve seen this vanish from a stool, rather than the usual chair. Raja appears in the audience. This sequence went down well.

Before the show members of the audience are invited to fill in slips of paper with the name of their favourite piece of music and its composer. These are placed in a bowl at the front of the stage. With Raja’s skill at the piano I expected this would be an exciting set and an opportunity for him to showcase his talents. Alas, it was a rather drawn out attempt at comedy with Raja eventually playing a few bars from Beethoven’s Fur Elise, the ‘chosen’ piece.

What followed was perhaps the worst version of the Razor Blades I’ve seen. The method was blatantly obvious to the laymen at our table and the presentation was like watching paint dry. This could have been such a fun and yet dramatic presentation. Consider this: As Jarrett displays each blade Raja plays a tune of different tempo, speeding up or slowing down as Jarrett tries to keep pace. Then Raja gets up from the piano to see how Jarrett’s doing. He gives him a playful slap on the back, which apparently causes him top swallow the blades. Then a dramatic build up to the production of the strung blades.

Out comes a long surgical table. Raja climbs up and lies on it face up. Without any additional cover, Jarrett takes a chainsaw and cuts through Raja’s middle. His upper torso is slid up towards the top half of the table. The table is split in two and the two sections move around. The legs are moving, as is Raja’s upper half. The sections are re-assembled, Raja’s torso pushed back to his legs and after a few moments he gets up, none the worse for his experience. This was a stunner and very well done.

To get his revenge on Jarrett, Raja has him tied up in a straitjacket and he must escape before Raja finishes playing Chopin’s Minute Waltz. Otherwise a slab of sharp knives and blades will come crashing down on the cardboard box where Elvis, Jarrett’s pet rabbit resides. They weren’t sure whether this was being played seriously or for comedy which took away from the dramatic effect. Also if you’re going to get tied up in a straitjacket, it should look like you’ll have great difficulty in getting out.

As it happens, the blades fall and the box is shredded. Poor Elvis! As punishment Raja gets placed in a Perspex box through which many swords are placed making sure he is pinned in place and can’t move. With an Assistant’s Revenge plot, a curtain is placed around the box and before we know it, Raja is out and Jarrett is in the box with all the blades still in place. From a top hat, Elvis reappears, so all is well.

For an Encore a Perspex box is wheeled on stage. Eighteen inches off the ground it’s about seven foot tall and three foot square. Jarrett (tastefully) strips naked and gets in the box to have a shower. To preserve his modesty he then dons a dressing gown. Picking up a large towel, a shape appears and under cover of the towel moves downstage. This is repeated twice more before the curtain on the shower front is drawn. The three shapes turn out to be two girls and Jarrett. So who’s in the cabinet? It turns out to be Raja!

Overall this is a good show. It wouldn’t take much to make it sensational. All the elements are there. Personality, talent and good magic. The problem is it doesn’t know why it’s there. The theatrical subtext is confusing and the characters aren’t properly developed.

Jarrett is a Puckish type of character who should be much more mischievous. Raja on the other hand is the quiet, serious thinker. But neither character is properly developed. There are attempts at conflict between the two personalities but they don’t ring true. Jarrett is performing the magic but he’s not selling it. For example when he goes into the sawing illusion, he dons a surgeon’s gown and for a short while starts to become a ‘mad scientist’. But he doesn’t continue and you aren’t sure whether it’s being played serious or for comedy. Thus the illusion which is brilliant loses impact.

Another question on the audience’s mind. What is a magician doing with a concert pianist? There is no attempt at explaining how this came about. Is it a magic show or a concert? A line from Jarrett like, “On the beach I found a bottle. Uncorking it a genii popped out and granted me one wish. He must have misheard me because I ended up with a large pianist,” would help. If both appeared early in the first half, it would help set the tone for what was to come later.

The printed publicity for the show, posters and tickets, do not, at first glance, convey there is magic in this show. In fact they’re the dullest posters I’ve seen. One, outside the showroom has the subtitle ‘HOUDINI MEETS HOROWITZ’. Now who in Blackpool is going to assume that the Horowitz refers to Vladimir Horowitz, the famous pianist? And if they did would it make them want to see the show?

Living in Las Vegas I suggest Jarrett and Raja invest in the services of a good show director who will, probably in less than a week, resolve all the points I’ve mentioned. They’re 90% there and with the help of the director, the show would be completely transformed into the world class show it’s crying out to be.