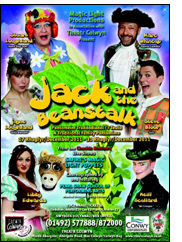 'Twas the week before Christmas and all through the land, children were shouting... "He's behind you". Well they certainly were in Colwyn Bay, where we were treated to a fantastic version of the timeless pantomime Jack & the Beanstalk. The main difference with this production and the reason we drove over 200 miles each way to see it was that this was the first independent pantomime staged by Stuart and Jane Loughland, better known as the illusion act Safire and current joint presidents of the North Wales Magic Circle.

The venue was the newly refurbished Theate Colwyn which, as the oldest surviving civic theatre in Wales, provided the perfect forum for this classic performance genre, with all of the front of house staff making every member of the audience feel welcome.

Each member of the cast added their own unique contribution to the show; Stuart Loughland was outstanding as Dame Tilly Trott, while Jane added a touch of class and glamour to the narrative role of Fairy Blossom. Other cast members included Libby Edwards as Jill, Steve Bloor as Jack, Neil Scullard as the Evil Mr Creeper and magical entertainer Marc Whincup as Squire Crumble who came into his own with a routine utilising some of the younger members of the audience. The other invaluable addition to the cast were the dancers from the Pearl Shaw School of the Performing Arts who treated us to some excellent routines and only added to the professional feel of the show. There were of course some excellently performed magical elements including a wonderful UV section featuring Safire's Magic Light puppets.

This was a great show and the audience left feeling thoroughly entertained. Just tell me where and when for next year.