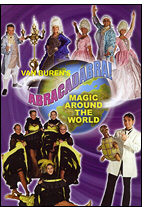 Occasionally in the UK you get the opportunity to see a good magic and illusion act, but rarely do you get to see a full illusion show, even rarer do you see a full production illusion show with a large company of performers weaved into the shows theme and story line. Add to that the fact that the entire show is performed completely surrounded by the audience in the circus ring of Blackpool Tower and you have something of a very unique experience.

The Van Buren family have teamed up with Hungarian impresario and circus producer Laci Endresz to present Van Buren’s Abracadabra – “Magic Around The World” illusion spectacular in the World famous Blackpool Tower Circus on select dates every week from mid April until 2nd November.

The beautiful and baffling illusions were built and created by illusionist Fred Van Buren who has now retired from performing but still runs Van Buren Studios where effects were created and built especially for this production, all themed and decorated to the various countries ports of call that the show takes you to.

Opening the show is a traditional dance routine gracefully performed by six glamorous showgirls and the shows host Bubu Endresz. This leads to the fast appearance of master illusionist Andrew Van Buren who in turn within seconds has turned a ball of fire into flowers into his head assistant Allyson, who then assists Andrew in magically producing a ring filling huge silk streamer out of which is produced three stacked goldfish bowls full of water and fish. Within a blink of an eye they have taken their applause and gone. This sets the tempo for the rest of the show, no padding, no wasted time, all meat and at speed.

Bubu Endresz returns wearing a Bavarian Lederhosen costume to explain the shows concept, a journey around the world presenting magic and illusions from each port of call. The dancers in Tyrolean costumes return joined by part of the male contingent of the show company, plus a St Bernard dog character for the Bavarian Austrian scene. The music turns into traditional Bavarian, Beer glasses are clinked, thighs are slapped, Bubu Endresz plays the Clarinet and then Andrew Van Buren returns wearing Lederhosen to perform a juggling routine with Bubu, leading into the Through the Eye of a Needle illusion with two real large beer barrels. After this two of the male assistants and one of the female performers take on the roll of the Romanian Trio Stoian presenting a very good spring board act still retaining the Bavarian theme.

From Bavaria we next fly to Arabia and Egypt, again the music and all costumes change to suit the scene, the harem dancers present the appearance of Sheik Van Buren who magically transforms sand into large bouquets of flowers, performs a levitation of Allyson and then presents the most baffling presentation of The Disembodied Princess illusion where the girls middle completely disappears, in the past only able to be performed on stage, but here this incredibly small slim sarcophagus box is performed in the very centre of the circus ring.

America is the next stop with a punk street dance scene followed by American police officer Van Buren making the punks ghetto blaster disappear, punk punishment with Van Buren’s Fluorescent Light Tubes penetration and then Van Buren’s famous Vanishing Motorbike and Rider illusion closes the first half of the show, disappearing from the centre of the circus ring.

The audience around me during the interval were full of very positive comments and speculation as to how was it done.

The second half opened with a very stylish Strauss Viennese waltz by some of the cast, powdered wigs, crinoline dresses, chandeliers all create a beautiful setting gently easing everybody back into the show. Show compere Bubu Endresz shows off his musical talents this time playing the violin, then Lord Van Buren returns to create his assistant from an empty crinoline dress, float a lit candle all around and right across the circus ring and then produce a number of goldfish bowls, glasses and bottles of wine from an empty ornate casket.

Bubu then presents his own comedy spot involving three audience volunteers who are each given a different funny voice. This routine was originated by ventriloquist Dennis Spicer in the early 1960’s and can now be seen performed in various styles and versions notably by Nicolodi on the continent and Wayne Dobson in the UK.

Next the mysterious Orient, so much happened in this scene at pace that it is almost impossible to recall it all. Oriental magician Van Buren made things vanish, girls appeared, were dissected, Bubu perforated by twenty odd spears, then Allyson vanished from one box reappearing from another in full view on the other side of the circus ring, drawing gasps from the audience. A Chinese lion dance followed with two traditional lion skins presented by the Zigong Acrobatic Troupe.

Then speedily on to a tribute to Hungarian Escapologist Harry Houdini again presented by Andrew Van Buren and Allyson with the aid of skillfully handled audience volunteers.

Then the ring filled with the entire cast, only now do you realise how big the company is, I counted 24, for the finale “From the Blackpool Tower to the Eiffel Tower”, a fast spirited Can Can dance lead into The Russian Bukovina Troupe performing a high speed skipping routine, then the return of Master illusionist Andrew Van Buren who magically produced Parasols, silk streamers and bouquets of flowers for the dancers. This very rousing finish to the show had the audience cheering and clapping in time with each other and the music.

Afterwards the audience comments were all very positive, teenagers called it cool and confusing, the older generations I heard comment that it was very entertaining, which is what its all about at the end of the day.

This show is large and ambitious, the cast hard working and it fly’s the flag for British magic better than I have seen it flown in years and all involved pull off a slick, stylish, colourful and well dressed entertaining show.

The Endresz and Van Buren families must be congratulated on this wonderful production, which is a must see for anybody interested in magic and seeing a lesson in presentation and showmanship.