Reported and photographed by John Derris 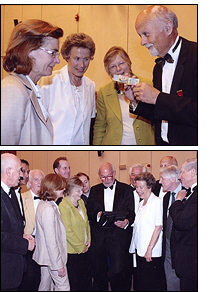 The Magic Circle recently presented an evening of magic at the Royal Free Hospital, Hampstead, London in conjunction with the Friends of the Royal Free, in aid of funds for the Radiotherapy department. It was 'house full' with over three hundred guests who were amused and amazed at the outstanding magic that was presented by stage and close-up professional magicians of The Magic Circle.

The evening was arranged by Nicky Begent, Chairman of the Friends of the Royal Free and Jill Pratt in memory of her husband Christopher Pratt, noted judge at Bow Street and long time member and secretary of The Magic Circle, who was treated for cancer at the hospital but who died earlier this year.

Photo: Gold Star member of The Inner Magic Circle David Beckley shows his magic matchboxes which have a life of their own and perform acrobatics to (l to r) Dr.Katherine Piggott who treated Christopher Pratt during his illness, Jill Pratt and Nicky Begent.

Photo: Magicians of TheMagic Circle and Dr.Katherine Piggott, Nicky Begent and Jill Pratt with mind reader and mentalist Graham Jolley making a prediction about the future of the government!