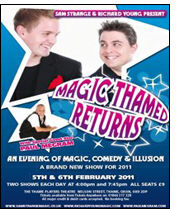 It is not often these days that one can see a full evening of magic at a real theatre. So it was a rare treat to attend “Magic Thamed Returns” at the Thame Players Theatre starring HCMS professional members Richard Young and Sam Strange with their special guest Paul Megram.

There were no dancers, singers, ventriloquists or other associated speciality acts, just wall to wall magic for the full two hour show. Yet the quality and variety of the magic was such that the sell out audience remained enthralled, mystified and thoroughly entertained throughout. Although not specifically a children’s show there were of course children of all ages present and from where I was sitting they were completely absorbed by the whole show.

I particularly liked the informality which was evident at the outset when even before the show began members of the audience were invited to step onto the open stage and inspect the props of the first illusion, the Cardboard Box Penetration. Richard and Sam were casually dressed and had a very modern approach to their magic with a great sense of fun. The rapport between them was easy going, relaxed and highly amusing. Although they have been together for only a short period I sense a great future for them if they continue to develop the double act.

The magic was mystifying, spectacular and amusing – what more could you ask? In many ways it was an illusion show interspersed with smaller, but nonetheless entertaining, magic. Among these was a brilliant mental routine using many books given out to the audience and ending with the production of a bowling ball!! This routine was fast moving and contained many feats of mind-reading. There was a smashed and restored borrowed watch routine, a hilarious “bandana” comedy routine, plus Sam’s card manipulations and Richard’s spooky tissue and paper flower levitations.

Paul Megram was an excellent choice of special guest with a great variety of amusing and baffling effects, including much fun with a Smoke Drum, a Card to Ceiling achieved at the first attempt and a Chair Suspension using a young lad from the audience. Paul’s many years as a professional magician showed in his assured interaction with the audience.

However, the outstanding feature of the show has to be the illusions which were scattered throughout both halves of the programme. These were both spectacular and mystifying and caused gasps of astonishment from an enthralled audience. Included amongst the illusions were a Chair Vanish, Passage through a large high speed industrial fan and a Shrinking Box illusion. All these illusions were being performed in a small intimate theatre just a few feet from the audience which to my mind made the presentations even more effective. The final effect was the Spirit Cabinet very well performed in the traditional way but leading to the show’s finale when appearing in the Spirit Cabinet was Paul Megram mounted on a full size Harley-Davidson motorbike!

Richard and Sam are hoping to take this show to the Edinburgh Festival. If they do I predict it will be a smash hit. If you get the chance to see them, do so, you won’t be disappointed.

A quick commercial. Rich and Sam are, subject to professional commitments, due to perform at our Annual Dinner on Friday, 13th May. Tickets are now available (phone Brian Dodridge on 01635 876948 or see him at HCMS meetings).