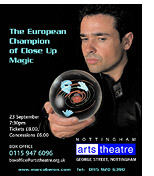 First of all, I greatly admire Marc for undertaking the venture in the first place. Finding work as a magician is one thing, but hiring your own theatre and crew, getting tickets, flyers and publicity prepared and promoting it is quite another. And that is before you even think about getting a two hour show together in the first place!

I was not familiar with the Nottingham Art’s Theatre. Finding it was easy enough and it was slightly entertaining for me to see the name Marc Oberon in lights across the front. A number of posters of Marc were dotted around, all with ‘Sold Out’ stickers across them. Marc’s worst worries that virtually no-one would turn up could be forgotten; all 320 seats had been sold and many more seats could have been filled had they been available.

I took three lay-people with me so that I would have the opportunity of listening to their thoughts and opinions. One of the first people I bumped into was Ian Rowland who was one of a handful of magicians who had made the journey from around the country but the audience was generally varied featuring a good cross-section of the public.

Marc opened with what has almost become his ‘Close-up act as known’ after his European Championships win in Blackpool, except without the spheres which wouldn’t quite work without the camera and big-screen set-up it had been designed for. This included his sphere to Oscar, excellent thought of card sequences, Dick Zimmerman (?) dancing ring on rope, beautiful large coin and keys routine and more.

Although billed as a one-man show, which it was magically, two guest acts were featured. In the first half a competent and entertaining juggler, juggling a hat and up to six balls and clubs. In the second, two break dancers with the usual gyrations and head-spins and also well received.

Marc featured many areas of magic including mentalism, with a thought projection in sphere effect using a presenter from Radio Nottingham to pick up an image chosen from a random page from a series of books by another spectator and a name revelation which I guess must have involved some pre-show work. General magic including, dancing cane, card manipulations, very elegant two linking rings magically becoming three, dancing handkerchief, cigarette manipulation, floating ball and linking ring. Illusion, with an apparatus-less suspension and ashra levitation. These showed Marc to be extremely versatile, competent performer with a very endearing way about him. The only criticism I could make was the inclusion of a few lightweight items such as Chinese sticks and three-way equivoque effect, intended as light relief but were simply too weak against the rest of the very strong material that characterized him and therefore served only to dilute.

The only thing I haven’t mentioned is his ONE MAN black art section. That’s because I saved the best until last. Without this, the show would have been perfectly good and everyone would have gone home happy but this was outstanding. It was the usual type of black art act with fluorescent objects such as spinning balls, butterfly, electronically lit balls instantly appearing floating around and just as instantly disappearing to be replaced with something else but some of them, such as a shark, masks and growing and shrinking sphere were truly amazing. Marc finished this section by apparently, and very effectively, levitating himself and spinning himself around in impossible ways. The whole show made for a fantastic night out but this section of the show in particular provided the other occupants of my car with a non-stop topic of conversation.

Well done Marc. I’m proud of you!! It was a great and very well deserved success.