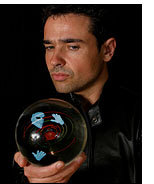 On Saturday 1st July 2006, while the embers of England’s World Cup Campaign were still glowing, an almost capacity crowd made their way to Nottingham Arts Theatre for an evening of mystery with the City’s own international award winning magician, Marc Oberon.


This is his second solo show at the venue and testimony to the success of the first was the fact that many of the audience were returning to see his latest offering. They were not disappointed as everyone’s spirits were lifted by this talented and unassuming entertainer.


Opening with a wide range of magical effects, from silver spheres that floated, disappeared, reappeared and multiplied, to amazing predictions and the location of a whole handful of cards chosen by members of the audience. Marc floated a lady in the air without any of the usual paraphernalia associated with getting her into the air in the first place. She simply took off and floated. The audience were stunned.

He went on to demonstrate some of the superb digital skill that has won him many awards within the magic fraternity. On several occasions Marc ventured into the realm of mind magic so popular at the moment and left people wondering whether he really could tell what they were thinking.

The first half closed with his fabulous lack light act The Wizard. Using ultra violet lights, this is without doubt one of the best acts of its type ever devised. It almost defies description as the surreal fluorescent Wizard performs amazing effects, including his face cracking apart and spinning his entire body in the air. This alone is a world class act and could easily have closed the show but for technical reasons apparently had to be located where it was.

Marc continued the second half with another range of smaller miracles yet again laced with his humorous and charming laid back style. He stands in stark contrast to the brash and often offensive rash of young magicians that are being beamed into our homes by the TV companies at the moment.

The audience were enthralled throughout the show, never more so than when Marc’s 8 year old son Xavier took to the stage. This was not a token appearance. He presented a magical interlude with his father and his cameo role was so well performed the crowd gave him a rousing well deserved send off. The show ended with Marc floating 10 feet above the stage covered by a cloth. When that was ripped away he had vanished, only to re appear as the ‘monk’ who had pulled away the cloth.

Marc was onstage throughout apart from two short interludes where an excellent new Nottingham Juggler made his first stage appearance to great acclaim from the audience.

It is to be hoped that Marc will present this show again after so much time and effort has been put into creating it. Remember the name Marc Oberon – if you see any event advertising that he is appearing go and take a look, if you like magic you will love him.


I travelled 90 miles to see this show and it was worth every minute of the journey, I am also glad that I could only hear the penalty shoot out on the radio, watching it would have been too much for me.