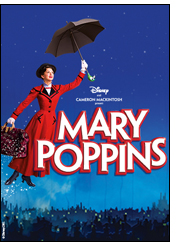 On Opening Night with my friend Denise, I went to see Mary Poppins at the Mayflower Theatre in Southampton. I had already seen it (three times!) a few years ago in the West End, and truly loved it! So when it was announced that it would be in Southampton I did wonder if it could possibly be as good as the West End Production (knowing that it was Cameron Mackintosh's Theatre in London and he could adapt his theatre as much as he wanted, to achieve all the remarkable effects) not so easy when you move everything into a different theatre for a short run, with varying staging facilities etc!


There were a few omissions and changes I noticed in last night's performance in Southampton (so few that I'm not even going to mention them), so did it make any difference to the show? No, not at all! It was as magical as ever and in some ways, many things were improved on and enhanced! Some of the scenes were so special, that at times it was as if you were watching the Disney film LIVE ON STAGE! So colourful and visually appealing, it comes with more than a sprinkling of "Fairy Dust".

Mary Poppins weaved its magic, to an enchanted audience. An audience of all ages I might add, from kids to pensioners, a show that you can feel "safe with", all good clean family entertainment and fun! (How could Tap Dancing on the ceiling not be fun?!)


"Mary Poppins" being one of the first books I ever read as a child, holds a special place in my heart. The film arrived and brought the magic to life, though not as authentic as the book and then many years later the musical arrived, and now it's on tour. If you think that the film cannot be bettered then do think again, I loved the film don't get me wrong, but to see, hear and feel the magic live is a joyous experience...

Suddenly, whatever your age, you are transported into being a child again! The audience on the opening night in Southampton departed the theatre flying as high as any kite (and higher than even Mary Poppins herself!)


If you love a great timeless story with great singing, dancing and magic then Mary Poppins is an event not to be missed!