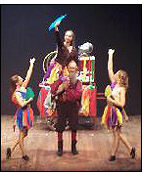 Combine the real magic associated with the mythical character Merlin and the modern day theatrical showmanship of illusionist and conjurer Dr Bondini and you have a formula for an enchanting and truly magical stage show.

The touring Merlin’s Secret features many of Bondini’s grand stage illusions and other magical effects which bring a unique flavour to a favourite fantasy tale. It’s a theatrical experience that is a delight to behold and will surely attract rave reviews up and down the country.

Philip Malcolm Bond, or Bondini as he is known in the magic world, should be proud that once again he has succeeded admirably in bringing back the spectacle and glamour of the big magical mystery show to mainstream theatre.

And what better vehicle for his art than to use the Arthurian setting as he personally switches from the characters of Merlin, the Archbishop of Canterbury, the Green Knight and Horatio the court jester to display his slick magical routines. Wonderful costumes, beautiful sets and brilliant theatrical staging have been the hallmark of the Bondini shows and this latest colourful production is true to form and never disappoints.

As Merlin he is able to produce the famous Bondini doves from thin air which now become harbingers of harmony in the land of Camelot. And once again Bondini has you booing, cheering and gasping as you and your fellow audience members participate in the proceedings from start to finish. It is an exciting and highly invigorating show to witness. Any worries that so serious a subject as Arthurian legend might mean waving goodbye to some of the familiar Bondini tongue in cheek humour can be quickly dispelled. Bondini has lost none of his witty quips and his special comic sparkle is as evident in this show as in his others.

Audience involvement reaches a peak when the evil sorceress Morgan Le Fay is dragged into the sword cabinet to emerge unscathed and to live another day. And so too do volunteers unsuccessfully compete with the character of Arthur to pull the sword of Excalibur from the crystal rock in which it is encased. It all makes for great theatre. A real treat. There are plenty of appearances and disappearances in an appealing sequence of scenes with Merlin educating Arthur in magic and swordcraft in the battle of good against evil.

Merlin’s Secret is a very ambitious piece and in the wrong hands could flop because of its complexity and its need for precision. But Bondini pulls it off with apparent ease to produce a pure theatrical masterpiece worthy of large audiences. It is evident that this polished performer laps up every minute of his time on stage which attracts a rapturous response from an appreciative audience. This is pure escapism and the audience love it. The delight on their faces as they leave the theatre at the end of the show says it all. Magical expressions reflecting a magical performance.

It is a show that solidly sticks in the memory. The music is hauntingly powerful in places while always being highly atmospheric. The words ably penned by writer and director Tim Heath are as potent as they are poetic and the choreography simply first class.

Some considerable credit must go to the beautiful Erin Downton who displays a wide range of performing talent in her various characterisations including Guinevere and Morgan Le Fay. A great and graceful dancer, Erin’s melodic tones and her skill performing the floating Holy Grail illusion delight the audience.

Not only does she lend herself to fine performance but she is also the young lady responsible for the choreography for the production. She is no stranger to Bondini productions and contributes hugely to their success. Erin is a magician’s assistant with formidable talent and versatility and a career path that looks equally promising.

Bondini certainly surrounds himself with the finest talent. Louisa-Marie Hunt as Gareth, who is predictably knighted by Arthur when the new king marries his beloved Guinevere, produces a cracking good performance with strong stage presence and the other player of some note is Daryll James as Arthur. He produces a characterisation that is as witty as it is charming. The very competent dancing skills of Carly Graves and Paul Templeman also enhance this magical production.

Magic fans will love this performance for its demonstration of some great classic magic, mastery of clever stage illusions and magical effects that are awesome. But it is also a treat for all theatre lovers and, indeed, those who relish great fantasy. Like the other Bondini shows, it appeals to all ages and is pure delight. Let’s hope that the Bondini stage show is no secret to those who love theatrical magic at its very best.