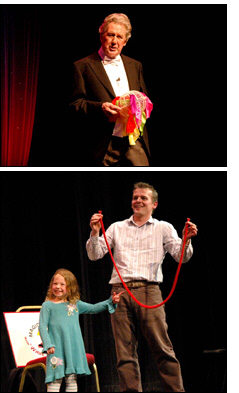 Perhaps displaying more bravado than common sense, the Modern Mystic League threw caution to the wind and staged a Magical Variety Show at the Blackburn Thwaites Empire Theatre. The show, produced and co-ordinated by Trevor Dawson, began to form in 2008 and burst onto stage on Saturday evening to an eager audience. The show was a joint venture with the Empire Theatre, a small but well appointed community venue run by an army of volunteers, supported by donations and sponsorship.

The original idea was to showcase the talent of the League and to bring funds into the Society. The League has a dedicated bunch of close-up performers who regularly entertain at charity and private events on a 50:50 basis, but this was the first time for a number of years that the League had ventured onto the stage. Seven artists and two compére’s provided a full evenings entertainment ranging from kids spots through magic, comedy and illusion.

Opening the show were local dance troupe the Zoe Taylor Dancers, who with their colourful costumes and vibrant music, set the scene for the evening. Brian Lead, our first half compére, gently warmed the audience with a few gags as he introduced Ron Baron and ‘Willie the Wellington’. Ron, a well respected children’s entertainer, engaged the young and young at heart with some delightful effects, closing with his talking wellington boot, Willie. Next on stage with ‘Cocktails Silks & Rock and Roll’ was David Snell who dazzled with a wonderful silent set of silks, parasols and productions. This gave way to Trevor Dawson, resplendent in tails, who gently took the rapt audience through some ‘Delightful Deceptions’ with silks, rope and even coat hangers! Brian Lead’s next compére spot was interrupted in a frenzy of noise and colour as Richard Rozel, an august style clown, similar in appearance to the late Charlie Cairoli, who burst through the auditorium for his ‘Dr in the House’ routine. A small boy who evidently needed his help was dragged on stage for a tooth extraction to much laughter from his family and friends. The stage was now set for the next act, ‘Gang Show’ specialist Donald Monk gave a ‘Lesson in Magic’ via the vanishing bandana routine. Donald closed the first half, literally with a bang, with Alex Powell’s ‘Speed Camera’ gag bringing tears to the eyes of the audience who were still laughing as they went to queue for their interval ice creams.

The Zoe Taylor Dancers opened the second half with a wonderful ‘Hey Big Spender’ routine, welcoming on stage our second half compére Mark James. Mark had the audience quickly paying attention with Bruce Kalver’s shrinking/growing head effect. Mark then introduced another seasoned children’s entertainer, Paul Guy with some ‘Bell-Ting magic’. Paul had the kids enthralled as he carried out a very funny ‘cards-across’ routine, moving onto a great drawing board effect as ‘Thomas the Tank Engine’ came to life in his hands. More interruptions followed as Brian Lead had again to cope with Richard Rozel trying to perform a vent act with a skunk and a crocodile to hilarious effect. Richard gave up and brought a very sporting lady from the audience for the 20th Century Bra gag. Mark James then introduced a very fast paced Peter Dean who soon had the theatre in stitches with a variety of sight gags including drill through head and mind reading rabbit. Last, but definitely not least was the Magic of Richard Rozel who first entranced the audience with a very visual ‘water through body’ routine. This led on to a frantic plate spinning segment with both children and adults getting a chance to show off their skills. The mood then changed dramatically as the lights dimmed and Richard expertly performed a colour changing light effect, nicely routined to bring on his attractive assistant Lara to help with the ‘lights through body’ illusion. A full walk-down ended a great nights entertainment and hopefully sent a satisfied audience on their way home. It seemed to go well, so it’s just possible we may venture down this road again.

Stage management was by Allan Clarke and Alan Mylecraine assisted by Jack Clarke and Todd Davies. Sound & Light was by Trevor Greenwood. Photography by Joe Gilmour, John Denton and Craig Docherty. Grateful thanks must go to the staff and volunteers at the Thwaites Empire Theatre for their welcome support.