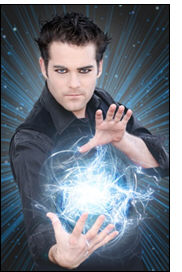 As Part of the Modern Mystic League’s Centenary Celebrations a magical variety show was held at the Thwaites Empire Theatre in Ewood, on Saturday 29th March 2014. I have attended this theatre in the past so knew how to find this fine building the in the Blackburn area.

Centenary President Trevor Dawson, resplendent in his chain of office was there to greet me together with Roger Woods, President of the Northern Magic Circle. Also in the foyer I was able to see long standing magical friends including Paul Guy, Ron Baron and Mo Howarth.

Having settled myself down in the comfortable auditorium it was curtain up and on with compere Shaun McCree who made a few words of welcome adding in some history about the MML from their first meeting on the 12th February 1914. I would note here he kept the links flowing very well throughout the evening Curtain up now and on with the show as the Zoe Taylor dancers sprung into action with high energy modernistic dance and innovative costumes to “The Final Countdown” as the laser generated images counted down the dates at the rear of the stage. This was a good show opener, which made me almost breathless just watching it.

Appearing as the first magician was Brian Sefton with his slightly lesser known act of pure manipulation. Billiard balls, cards and thimbles they were all there and appeared and disappeared quicker than you could blink an eye. His zombie is one of the most graceful ones I have ever seen and every move timed perfectly to the music. His finale was a black and white silk blendo to cloak and flash appearance of a bottle of champagne in an ice bucket. A great start and he set the standard high.

Following on, Paul Joyce and his famous Noise Meter aimed at the younger generation. He is a good children’s entertainer who I have met before through the IBM. He presented an excellent lost and found (in a nest of boxes) ring routine with the help of a boy volunteer and concluded in giving him a ride on the flying carpet. Shows such as this can only give a flavour of what he could offer but I am sure his 45 minute or hour performance is equally strong and enjoyable.

The next performance was in the hands of Donald Monk who is a great ideas man, inventor and illustrator. His act predominately consisted of two TV Game Shows he told us that he had invented, Chance of a Lifetime (COAL!) and Donald’s Ace Race. Unfortunately I felt they dragged on too long and from where I was sitting, the audience seemed to lose the plot and commented on this during the forthcoming interval. It was such a shame because the ‘stung’ false tab on one of routines did not receive the audience appreciation it deserved. This sadly seemed to put the audience on a low just before the comfort break.

Fifteen minutes later though the Zoe Taylor dancers put us back on track in their now shimmering glittery gold outfits with another modern well spirited smiling high kicking routine to bring back on stage compere Shaun. His Rocky Racoon routine is one to remember (and I am sure many did) with great gags and antics. This had exercised our chuckle muscles ready to receive Peter Dean (WHODEANO – who else!). He is a riot of fun and laughter from beginning to end, a right roller coaster of madness and mayhem. His linking ring routine with a little girl was a cross between the well known ‘little bit of confidence’ scene and total slapstick. When he took pink furry handcuffs out of a lady spectator’s handbag it was a pure hoot. There’s nothing smutty, just tongue in cheek and only slightly risqué humour which proves Peter is equally at home working with children and adults.

Time flies when you are having a good time so it was now to the last act in the very capable hands of International Illusionist Rick Green (photo). He started with what I know as the homicide illusion, but once the blades had gone in, then two rectangular tubes were passed through the box making it more impressive than ever.

Next he presented the spikes through cardboard box with a girl inside. This always seems the most dangerous of illusions to me and I have reminiscences of how Hans Moretti used to perform. Rick then came front of tabs to takes us through the Grey Elephant from Denmark routine whilst the scene was changed for the Origami Box. This was neatly performed and well received with enthusiastic applause.

His finale was vanishing girl from box who reappeared from the back of the theatre, but wait! a second girl then appeared from the empty box! WOW! Follow that. The answer was we couldn’t so it brought the centenary show to an end and as the appreciative audience left the theatre they had certainly had a good evenings’ entertainment.