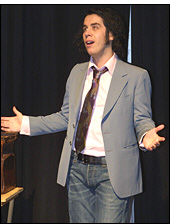 As more and more magic conventions start to fill up the calendar, a sort of half way measure proved to be a comfortable compromise and a great success in Nottingham last weekend, with an evening gala show coupled with three substantial afternoon lectures thrown in for good measure.

Not that I ever doubted it would be a success as this was just another in a long line of magic extravaganzas that the Nottingham Guild of Magicians stages twice a year at the Bonington Theatre, Arnold, Nottingham.

Approximately forty magic nuts braved the bitter cold of a January afternoon to attend the three one-hour lectures, and all for the bargain price of £6.00.

Following my brief introduction Marc Oberon kicked things off by demonstrating why he holds the title of European Champion of Magic with a plethora of tight and impressive routines. Items covered were mainly close-up and mentalism, most of which were for sale, refreshingly though all items were revealed in full - dealers and other lecturers take note!

Brian Sefton was next up with his mind blowing manipulation act, followed by step by step explanations. Surely it must be easier to thread a needle wearing boxing gloves than to produce endless stacks of cards in white cotton gloves? As always excellent entertainment and priceless tips from a real gentleman.

Last but by no means least a relative newcomer William Houstoun, once a Nottingham Guild member but now living in London it was easy to see why he’s making quite a name for himself. His manipulative close-up skills with coins and a laid back style of delivery will surely mean he will be in constant demand for his talents for many years to come.

As the lectures drew to a close the attendees were eagerly awaiting the prospect of the evenings gala show, or was it the pull of the local Chinese restaurant, who twice a year are puzzled as to why a group of Bicycle and Sharpie wielding magicians take over their premises?

So bring on the main event, the evening show compèred by Nottingham’s very own Neil Haywood. The audience were soon warmed up by his zany brand of humour and sight gags – Neil you can still be seen when the mic stand is in front of you! Trust me.

Brian Sefton opened the show with the act he had explained earlier in day and left many in the audience open mouthed. (No he didn’t drop his trousers; this would come later in the show) During ten all too brief minutes Brian produced and vanished cards, thimbles, balls, canes and a champagne bottle. The audience may well have seen this beautiful act before but they’ll certainly be there to see him again – “Proper magic” as one audience member described it during the interval.

Marc Oberon was next up with his multi award winning competition act; Marc being a local lad to the venue he had quite a large following of loyal fans which was richly observed. His deceptive productions of golden objects gave his act the Midas touch, but it was his any card any number that wowed the crowd. For the first time ever I saw Marc miss on a card, but he had such a funny out that maybe he should make it part of the act? He then ended the spot with the levitation of his assistant.

Vizage a.k.a Sam and Vicki Lane closed the first half with a frenetic display of illusions interspersed with song, dance and very appropriate choreography. Fire eating, fire pyramid, heads off, razor blades and a body squasher were just a few of the effects performed. I have not seen so many comical facial expressions as on Sam’s face since Phil Cool was last on the small screen. Their upbeat illusion act never fails to win an audience over and on this night they stole the show. Well worth your while to go see them in Scarborough this summer at the Spa Theatre.

The second half was opened by Marcus Blake who treated the audience to a bit of mentalism. A tough act to pull off as all too often mind magic can fall flat, but not tonight. A well disguised version of the tossed out deck was the main thrust of the act and left the ‘Muggles’ open mouthed once again. It was great to see just how strong a classic of magic can be in the right hands.

An ultra violet delight followed, billed as the Wizard but actually Marc Oberon’s alter ego. This one-man black art act was a colourful mosaic of ideas that ended with the wizard being repeatedly spun around in the air to great effect. Being one of the privileged few to be back stage during the day, I was amazed to see the huge amount of set up that goes into this kind of act, no wonder there are only a handful of people still doing this kind of thing.

Top of the bill was the star of TV’s Monkey Magic and Dirty Tricks Pete Firman (photo), who with his alternative style had the audience in the palm of his hand right from the start. His gags were fast and furious with a clever delivery; the magical content was sound with a great version of Confabulation, trust him to pick me! He also made it no secret that he wears very colourful Y-fronts during a hilarious lesson in magic, which covered the inner workings of the vanishing hanky. Won’t say any more as you must see it live.

To end, the minor task of swallowing ten lit cigarettes, no mean feat especially when each one is followed by sheet after sheet of tissue paper. It was nice to see Pete stop mid routine concerned about a lady on the front row who was coughing, crying and making a hell of a noise. “Is it the smoke?” asked Pete, “no” replied her friend “she is in fits of laughter watching you!!!”

Great stuff and the end to another great night of magic and variety.

It will become more and more difficult for the Guild of Magicians to maintain the standard of these shows but I’m sure based on past efforts they will.

Devised by Freddie Wilkinson and Andrew Morrison, with Roy Bond, Rhys Smith and Barrie Perkins working extremely hard backstage plus various other Guild members all kindly given their time to make the day a great success.

The next planned extravaganza is on Sunday 23rd September 2007, book early to avoid disappointment.

See you all there,