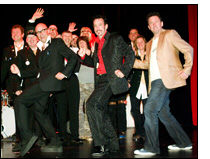 Over 1400 people packed into the Cliffs Pavilion in the middle of Summer and on a Sunday night (it was Fathers Day and the sell-out crowd once again proved that people crave live entertainment and are not only interested in TV reality shows as many commissioners would have us believe) to watch three of the funniest performers working today. Our host was Paul Zenon who opened with his trademark cut and restored microphone lead establishing himself as an experienced professional. The audience quickly warmed to him and the show was off to a great start. Paul proved the old cliché of ‘packs small, plays big’ performing the signed bill in lemon to an audience of hundreds! His routine cleverly uses lines sympathetic to the audience view of the trick from near the back of the theatre, which made the effect pack a punch despite being small magic. Zenon performed visual stand-up comedy and his piece on airport security was highly original and an excellent example of the comedy which can be found in everyday situations.

Paul introduced an old-timer one-man band who proceeded to sing and jiggle his anatomy causing various musical instruments strapped to his body to clash and bang. Zenon’s follow-up line of ‘You didn’t expect that did you? Neither did we!’ was one of the biggest laughs of the night. An unexpected and intriguing act, half the audience sang along the other half laughed at the absurdity of the situation.

The first-half special guest was stand-up and TV comedian Lee Mack. Lee came on and slaughtered the crowd. He played the theatre as he found it and again it was immediately obvious that here was another experienced pro. Lee’s observations of the theatre and interaction with the audience were hilarious and one couldn’t help admiring his incredibly fast wit. There were some youngsters in the audience but Mack’s act was no holds barred, so a few of the expletives may have been a little unexpected. The laughs were loud and constant throughout his set.

After balancing a pint on a snooker triangle and swinging it around his head, a feat which had the back row of the theatre on the edge of their seats despite the pint being so far away from them, he introduced Bob Wooding with his fantastic balloon act. Balloon sculptures of all shapes and sizes are constructed (or perhaps not) as Bob rushes behind a screen, each model appropriate for the music playing at that time. Simply brilliant.

And then the performer perhaps most had come to see; Harry Hill. Now, how do you sum Harry’s act up? With difficulty! Harry is like a firework going off, with random and weird remarks being thrown into the mix. Some of these quips come round full circle completing hilarious gags. What amazed me most was how subtly topical and controversial his material was. I’m not sure whether we witnessed a genius or a madman ranting! The audience loved him, and his finale of playing the horns with two men in bold wigs (is that possible to have?) confirms he is definitely an intelligent chap.

The tour was an extended run of Zenon’s sell-out shows last year in Brighton for his Wonderbus project, which is shortly to receive full charity status, offering shows to raise money for older folk to have a day out and take in a show at the seaside. If you didn’t get the chance to see the tour you may have missed one of the best variety shows touring this year. It was for me, one of the best variety shows I’ve seen in a long time.

Oh, and Zenon gave me plenty of booze backstage after the gig – but this in no way has affected my review.