An Evening with Paul Daniels 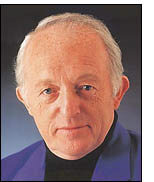 WITHOUT the glitzy glamour and the big illusions that characterised his prime time television show, Paul Daniels continues to offer delightful magical entertainment in his current one man stage show.

Just weeks away from his 68th birthday in a provincial theatre in Hampshire, Paul presents his eagerly awaited show, An Evening with Paul Daniels. And you couldn’t have a better evening than being in the company of this larger than life great performer. An energetic and vibrant Paul Daniels demonstrates to his relatively small audience how he easily deserves the accolade most give him as being the most famous and finest living British magician. He is clearly a legend in his own lifetime.

For two hours we get Paul Daniels at his very best revealing his affable on stage personality encompassing brilliant fast and often off the cuff humour, great audience rapport and well selected killer magical effects.

Paul is a true gift for magic fans, and indeed all those who love variety, at a time when magic in mainstream theatres is depressingly scarce. While the show publicity might place emphasis on Paul answering questions about his life and career fired from members of the audience, his love of magic and his ability to perform superb solo effects shines through. There is little time before he reaches for a pack of cards to perform his first trick of the night. And everyone is in for a treat – for here is a magician who is second to none for his superb presentation of magic.

Routines that many magicians perform as standard such as the chop cup, six card repeat, find the lady and changing card take on a new life in Paul’s very capable hands. His electric chairs routine, which has become one of the hallmarks of the Paul Daniels act, never fails to be immensely entertaining and his solo levitation remains breathtaking.

In common with other big stars of variety, in the audience you feel that Paul is performing just for you.

His personality, as big as it is warm, is captivating throughout the two hour show – and most audience members including me feel sad when it ends. It is Paul’s special hypnotic effect – hours transform into minutes as he takes you on a fast entertaining journey jam packed with items of interest. Paul’s audience always draws a sizeable number of magicians and he has a lot to teach, mainly in terms of slick and confident presentation as well as getting the audience on your side.

Very soon into his act, magicians are asked to stand up at which time he can generously invite the lay audience to book them for their special occasions while making a clear mental note for his own benefit of who not to select for volunteers.

This is a show that is laced with some very funny anecdotes as well as tracing how the young Daniels, having grown up in a village in the North East, became fascinated by magic after performing his first trick at the age of eleven. He is then able to reminisce on a great life entertaining members of royalty and rubbing shoulders with many of the greats in show business. Paul is a great communicator. But the anecdotes are adequately interspersed with the performance of magic at its very best.

It is a show that won’t disappoint and deserves to sell out as it continues on its tour. Paul Daniels is an institution in British entertainment and remains a fine ambassador for magic. Long may he continuing what he does best…delivering his own special blend of magic to audiences who love every minute of him.