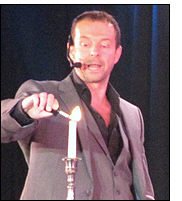 Paul Stockman is a name that most of you would probably know if you are a fan of Mentalism. However until last week I had never had the chance to watch Paul in action.

You see, Paul rarely appears at conventions or meetings and does very limited lecture work.

He is however one of the busiest performers in the UK. Paul works all over the world and has a reputation as a wonderful performer and writer/inventor of new and clever ideas.

Paul was booked for 3 nights at The Queens Theatre and what a performance it was.

Paul thrilled and charmed the audience from the moment he walked on stage with his mix of dark and light hearted demonstrations.

My wife was a little uncomfortable before the show began as she really did not want to be called up on stage. However within 10 minutes of Mr Stockman walking on stage she had her hand in the air volunteering herself to take part in the next trick.

Paul opened the show with a selection of 50/50 chances. This introduced the audience to the show gently but really did set the scene for what was about to come. The next 60 minutes flew by with many twists and turns as Stockman gathered up the audience and plunged them into a world that defied belief.

The ending of his show was totally mind blowing and left the audience in no doubt they had just witnessed a very special performer.

If you have not seen Paul Stockman perform live you are missing one of the best the UK has to offer.

As for my wife, well she wants to go see Derren now, thanks to Mr S.