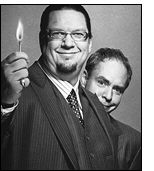 People tend to either love or hate them, but either way, no one was in any doubt that the maverick performers, where taking a short break from their award winning show at Rio Casino in Las Vegas to perform a short run at the Apollo, Hammersmith. This was the pairs first appearance in the UK for 15 years, following their series ‘The Unpleasant World of Penn and Teller’ for Channel 4.

Having been lucky enough to have seen them on several occasions in Vegas, it was with some excitement that I joined a packed audience on the Saturday night, to see what treats Penn, the tall, brash front man and Teller, his silent partner, had in store.

There was much more audience participation and less of the grotesque than I had seen in their previous shows. To open, a lady was invited up onto the stage by Penn, whilst Teller, head in a concrete type box, stood on the other side of the stage. Placing her glasses in his jacket pocket for safe keeping whilst Penn performed a few effects involving a billiard ball and wand, he went to return the spectacles to the lady only to find them missing. Smashing the box around Tellers head, his partner was revealed, wearing said specs.

The beautiful Cut and Restored routine which followed, with the assistance of a small boy form the audience and a roll of polyester sheeting was slick and humorous. Next was my favourite, Teller's version of Miser's Dream, which was rightly listed in a recent series of articles in the Magic Circular magazine, as one of the 100 best tricks ever. For those who are unfamiliar with this, Teller wets his hands in a large empty fish tank, then magically produces numerous coins, which he drops into a goldfish bowl held by a lady from the audience. However, when he scoops up the 50 or so coins and places them back into the main tank, it instantly fills with 100’s of gold fish. Pure magic at its very best!

More involvement with the audience followed; with predictions from joke books passed randomly back through the audience. The final ‘punch line’ was predicted in an envelope which had been on display in the foyer for the arriving audience to sign.

The expected revealing of how tricks are done involved Teller demonstrating misdirection during a cigarette production, and then a extremely polished Torn and Restored Newspaper routine where by both the performers tore up their own paper, swapped ripped pieces and with impeccable timing both nonchalantly produced the fully restored papers.

The first half ended with Teller apparently drowned in a water tank attempting to break Houdini’s record of holding his breath under water. The routine was amusing and smooth, the humour centering around Penn’s lack of success in finding the spectator's signed card, which would allow Teller to be released, coupled with a spectator calling out the time every 30 seconds - on each occasion Penn politely replied “Nicely Done”, even when his world was falling down around him, in his attempt to find the card. The added touch being that Penn’s eulogy to his deceased partner, lying motionless in the tank, but with I hasten to add, the spectator's signed card revealed in the diver's mask Teller was wearing, was interrupted by the shout of “eleven minutes 30” by the timekeeper.

As they say in footballing terms, “it was a game of 2 halves”, and for me, the second half lacked the punch of the first. It began with Teller sitting on a park bench, joined by Penn, who suddenly found himself handcuffed by his colleague. Following a period of dialogue in which Penn became increasingly angrier, the pair hugged, during which Penn was secretly released from the cuffs and exited the stage, whilst Teller was left on the bench, handcuffs ready for his next victim. This seemed drawn out and to me lacked the zest for a routine to open the second half of the show. There were the familiar signature pieces - Teller's Needles and Thread routine, and an effect where the shadow of a rose in a vase was projected on a screen, and as Teller pruned various bits of the shadow, the matching pieces of the real flower fell off in sympathy, both of which were delightfully performed.

A knife throwing routine with the assistance of a lady from the audience had a nice touch in that, when she was blindfolded and thought she was going to throw a menacing looking blade at Penn, in fact the one she was holding was attached to a fishing rod, so when she actually threw the knife it was controlled in the air by Teller, allowing Penn the thrust the real knife into the wooden board near to the painted outline, which was then revealed to the spectator. I understand that earlier in the week the spectator was so worried that she would hit Penn with the knife that she was too scared to throw it.

A member of the audience was given a camcorder to film the spectators’ view of a close up effect with a toy cow in a farmyard scene which was projected onto the large screens. The audience could see the trickery involved, items being handed thru to Penn by Teller through a gap in the backdrop resulting in the cows multiplying, the background changing, as did the cover of the table cloth, the camcorder man oblivious to all this. But all this was a rouse to find that the real effect was that the spectator transposed into Teller who we had seen earlier.

Penn appeared with a high powered nail gun and demonstrated that it was capable of firing nails quickly into a thick piece of wood. He explained that the nails were contained in a plastic sleeve inside the tool, and by removing some of the nails from this sleeve the nail gun made the noise but did not dispatch a nail. He stated that he had memorised the random pattern where the spaces were and then proceeded to rapidly fire the nails into the wooden block however when he reached the point where the nail had been removed from the sleeve he fired it into his hand - the speed increased, and he continued to make the right decisions firing nails into the wood and the empty sleeve into his hand, then neck and groin. Thankfully his memory was correct and he escaped without injury.

I am a fan of the American Duo and was now wondering what big effect the Maverick pair would close the show with - their world renowned Bullet Catching trick maybe or one of their other signature effects to bring the show to a memorable crescendo. But unfortunately, I was to be disappointed - the lights were dimmed to reveal Penn holding a small flame, he thanks all those involved in the show and then spoke for what seemed like an age but was more than likely 7 - 8 minutes about fire eating and how it appealed to him as a child. He then performed a short fire eating routine, putting the burning flames out in his mouth, lit the torches from this mouth, again all very slick but something I have seen many times at circuses and by buskers in Covent Garden and then... that was it, show over! They ran off stage and outside to sign autographs, which I have to say is always a nice touch for the audience.

Would I see them again? Too right! Would I recommend them to others? Again yes, the one thing you can rely on is that their show will always be well rehearsed, slick and smooth.

If it had just been advertised as an hours show and consisted of the first half, I would have gone away happy, content and thoroughly entertained. As it was it felt I felt a bit empty, especially with no real finish which would have sent the audience away buzzing. Most people I heard chatting on the way out, were still discussing Teller's 'Miser's Dream' with the goldfish tank in the first half.

Hopefully they won’t wait another 15 years to return to these shores.