Reviewed by Alan and David Maskell 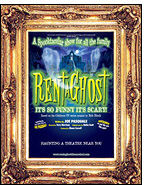 Readers of a certain age will remember with nostalgia the BBC children's show “Rentaghost” in which a group of hapless spooks formed an agency and ended up in all sorts of scrapes. Joe Pasquale has picked up the story and written it as a musical which is now on a nationwide tour. The story lends itself well to magic and Stuart and Jayne Loughland have added a good number of magical effects which fit nicely into the evening as part of the story, often giving the audience a double take as they realise what they just saw!

If you remember the series, you won’t be disappointed with this show and if you don’t, take the children anyway as they, and you, will enjoy the characters, comedy, magic and fun that make up a fun night out. However, don’t take my word for it; here is my eleven year old son, David’s, view -

On Monday 13th, I went with my Dad and friends to see the opening night of Rentaghost. The TV series was originally created by Bob Block and this new version by Joe Pasquale has lots of characters, lots of new music and some good UV puppets and magic by Safire.

I thought the show came over really well on stage and it was very funny both for adults and small children. My favourite characters were Hazel McWitch (played by Laura Sydoni), Mr Claypole (Joseph Wicks) and Hubert Davenport (Mark Slowley).

Joe Pasquale provided the voice of Ed the Head and the introduction. Stuart and Jayne from Safire were part of the cast and performed some good tricks and their puppets sang some of the songs and took part in the haunting scene. I heard that Bob block was in the audience for this first night and I hope he enjoyed it as much as I did.

Rentaghost is going on tour all round the country and is appearing at Butlins in the summer! If you want to book go to www.rentaghostthemusical.com – there are also some good games on this website.