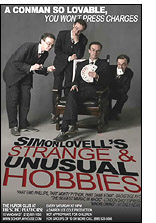 Whilst on holiday I went to see Simon Lovell’s “off-Broadway” show. I had seen Simon at conventions and lectures but didn’t know him personally. It says everything about Simon that I walked into the Theatre going to see a magician I didn’t really know and left saying goodbye to a friend.

The SoHo Playhouse is small and cosy, located in a residential street and is a bit of a game to find. The show is housed in the basement bar which Simon frequents prior to the show rather than sitting in his dressing room. Within moments of meeting me Simon had remembered the one time we had worked together and the bonding process of friendship had begun; cemented by the bottle of Bud that I had placed before him.

There are two types of people in magic, those that like Simon and those who don’t really know him. A self-proclaimed bad boy (of magic) he openly talks about his history of drug taking, alcohol abuse and time in prison. But you can’t fail to be touched by the genuine emotion with which he talks about the recent loss of his close friend Billy McComb and being six blocks from the World Trade Centre on the morning of 9/11. Simon is a “what you see is what you get” kind of person who doesn’t suffer fools gladly and some people simply don’t like that.

The show ran for 90 minutes and opened with a 15 minute guest spot performed by Ted Greenburg, the Emmy award winning comedy writer who wants to move away from writing for others, to concentrate more on live performance. I guess he uses this spot to give himself stage time and in doing so everybody wins. He gets an opportunity to work in front of an audience, we got the chance to laugh a lot and Simon gets an Emmy award winning opening act.

So after the warm-up immediately followed the main event and Simon began by telling the audience that this was not a run of the mill kind of show. That it was in fact a journey through many of his life experiences with some interesting stops along the way. He then asked “are you guys prepared to come along for the ride?” Well the audience certainly were and had a great time in doing so.

The show opened with a card trick where the chosen card was transposed (in a spectator’s hands) with a previously discovered “wrong card” - something that Simon said he was very good at finding! This was card work level 1 but was also a perfect demonstration of Simon’s ability to sell what he is doing to an audience as they were fried when the chosen card was finally revealed.

Moving away from magic, Simon shared with us his love of practical jokes, specifically ones that had ended with him in jail. Just your everyday stuff, such as a fake kidnapping, a bank robbery involving a pensioner and writing “With love from Jesus” on the inside cover of Hotel Bibles. We then touched on one of his hobbies - steeling check-out conveyor belt dividers from supermarkets – all over the world! He then alters the slogans written on them and sneaks them back into the shop. Very funny, but surely this is a man with too much time on his hands!

We then returned to cards with something that he introduced as “vile and disgusting” but was actually a very nicely done folded card in mouth routine with a paper rose (from napkin) souvenir for the lady helper. Simon is known as a world class card man and this came to the fore in the next segment when he talked about his days has a conman and how he was taught by his grandfather from a very early age. He demonstrated methods of cheating at cards using overhand shuffle control, second and bottom dealing, block switching (a palmed hand of cards) and riffle stacking. In a word, awesome. And the rest of the audience thought so too.

The question of what happens when you are caught cheating was answered very theatrically with Colin Rose’s version of Smash and Stab. This was presented with great tension that really drew the audience in. So it was no surprise that he had a problem getting a spectator out so he could teach him how to cheat (with a “Spectator cuts to the Aces” routine).

More mayhem followed, centering around the subjects of divorce and the “Floating Orb of Zanzibar” before he bought his hobbies full circle back to magic as he explained that after sometime away he had fallen in love with magic once more. The final part of the show featured a multiple (six) card selection routine with all of the discovered cards vanishing only to be found in his wallet, at which point a bloke at the front started shouting “flipping wow, flipping wow” (or words to that effect).

The show closed with the simple sentence “Thanks for coming, so now to the Bar!!”

The modest audience of 20 plus souls (it’s only a small space and is comfortably full at 40, although Simon tells me they have had 60 plus on occasions) either took up his offer and stayed by the bar or filed back up the stairs and out onto the street, Simon taking time to thank all of them personally.

Simon’s show has received great reviews in the New York press (not an easy thing to get) and you can see why. This is a complex man at ease with himself and what he does. He says he does it for himself but if the audience digs it then that’s fine, if not that’s fine also. Well I would say they do dig it and both the show and my new friend Simon are great adverts for the art of magic.

If you are ever passing the SoHo Theatre in Downtown Manhattan on a Saturday night pop in and see the show. You won’t be disappointed and Simon would love to see you I’m sure.

For Venue details: www.sohoplayhouse.com
To find out more about Simon: www.simonlovell.com