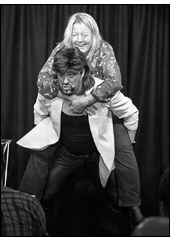 I can't say that there have been many Saturday nights in my life where I have been entertained by a mullet-haired, leather-trousered Russian. But this weekend was different. And entertained I was - by Kockov the master magician.

Kockov - a Monrokvian master mind reader and magician - had the crowd in the palm of his hands when he took to the stage of the Smoke and Mirrors boutique magic theatre pub. Dressed in eye-wateringly tight leather trousers, with a mullet that many 80's pop stars would be proud of, Kockov - aka Jasper Blakeley - performed a non-stop repertoire of mind bending tricks. But his magic routines are just part of the show as unlike some other magicians, Kockov makes his magic and illusions side splittingly funny. He had the audience in stitches with his off the cuff remarks and outrageous humour.

From using word association and his mindreading skills to guess a name of a film a member of the audience had chosen to a series of impressive card tricks to guessing phrases and words in six random books - the pages and phrases chosen by the audience. Although there are many who can produce similarly stunning magic, there are few performers who can combine this skill with the quick wittedness of a comedy club performer whilst maintaining the illusion of being another character. Kockov, however, is such a man.

The show was interactive to say the least with many of the audience were taken up on the stage to take part in the tricks. But that was what made it so much fun to watch - and everyone was more than willing to be crazy Kockov's assistant. At times I was laughing so much it was hard to see and by the end of the night my sides were aching.

One of my favourite lines was when he asked the audience "Have you seen the new constipation movie? No? ... It ain't come out yet!"

Mark Bennett was the warm up act for Kockov, ripping up tissue paper and turning it into a wizard's hat before squashing a banana into a cloth and making it disappear to gasps of 'how did he do that?'

As a trained actor, Jasper has combined the art of magic with acting. He has created more than a dozen characters for his act from a vicar to a Victorian cockney street hustler. I just can't wait to meet them!

Smoke and Mirrors as a boutique magic theatre pub - the only one of its kind in the UK - offers something different and exciting for the city. The fact it is quite bijou provides quite an intimate setting for a show and by the end of the night the audience all felt we had shared something special.

Smoke and Mirrors offered a fantastic, fun, laugh a minute night out. I will certainly be making a return visit. Especially next time mullet haired maestro Kockov is in town!