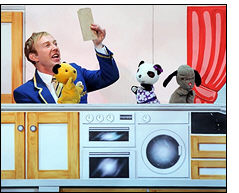 It was the time of year when parents of school children throughout the land were looking for activities to take the youngsters to. One such opportunity for those in the Greater Manchester area was The New Sooty Show when it arrived on Sunday 3rd August 2014 at the Quays Theatre in the Media City area of Salford Quays, playing to two full houses.

I caught up with Richard Cadell amid his check shirts and Slater’s blazer in Salford on the tour, between Consett and Ilfracombe. In fact Sooty will be appearing at 104 theatres this year. Not only does Richard keep the road wheels turning but the camera reels too. In the pipeline for next year at the moment are 2 DVD’s where Sooty teaches literacy skills but on a light hearted basis more a ‘laugh and learn’ type of thing where the message is delivered without the formality of the classroom discipline. Also in 2015 a full length movie is to be filmed for the big screen for release in 2016. Sooty really does have endless energy for a 66 year old!

Let’s look at the current show, it runs in two 45 minute halves, offers superb value for money and excellent content no matter whether you are today’s child or an adult who remembers the original version with Harry Corbett. From my seat in the centre of the front stalls I could clearly see the adults were enjoying it as much as the children. It is a high action presentation full of the timeless slapstick, magic and mayhem which Sooty and Co are famous for. There were two characters new to me Ramsbottom and Butch who with dry humour kept ‘interrupting’ the proceedings with great appreciation from the audience. Mr Slater’s impending appearance (which never happens) keeps everyone on their toes and no one is safe from Sooty’s water pistol!

Sooty Sweep, Soo and Richard will be appearing at the Pavilion theatre Bournemouth as part of the British Ring convention along with Jeton, Mr Terry (Terry Herbert) and Mel Harvey on Saturday 27th September at 10.30am. Tickets for this special performance (Sooty and Friends Magic Show) are only available from the theatre box office and as it is already being marketed to the public, if you wish to attend to support the society may I suggest you contact them on 0844 576 3000 www.bournemouthpavilion.co.uk online booking www.bhlivetickets.co.uk. Until next time, ‘Bye Bye everybody, Bye Bye’.