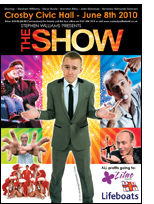 This was a show of pure entertainment, with plenty of variety, as Stephen Williams, Steve Royle, John Kimmons, Brendan Riley and the Beverley Edmunds Dancers kept us thoroughly entertained with an evening of comedy, magic, juggling, ventriloquism and dancing. Laurel and Hardy lookalikes were also mingling with the audience presenting some close-up magic in true Laurel and Hardy style.

The well known voice of Peter Dickson started proceedings as the Beverley Edmunds Dancers took to the stage to open the show. Emcee, Brendon Riley then gave us a flavour of his well established Northern humour, and although it took a while for the audience to appreciate him, his lively comical interludes were well received.

The first class talents of John Kimmins were clear to see as he launched into his performance with a bit of magic involving ropes as well as several minutes of comedy with just a towel! This was followed with a very dynamic Rocky Raccoon routine as well as some comical dialogue with his puppet Charlie. However, the most hilarious part of his act was when John enlisted the assistance of two members of the audience. Once on stage they each wore a mechanically operated mask that was expertly controlled by John, as he provided all the dialogue and funny voices. This was comedy ventriloquism at its best.

Next up was magician Stephen Williams, who is a very watchable and talented performer, with an accomplished repertoire of magical skills. Alongside the appearance of candles and silks, Stephen also produced a number of doves before presenting an excellent floating table routine. Stephen closed the first half with an emotive and convincing Snowstorm illusion based around memories of his Grandfather.

After a short interval the show resumed with dance from the Beverley Edmunds Dancers, before comedy ace Steve Royle provided us with copious amounts of crazy comedy combined with juggling. No matter how many times you see Steve perform he is always tremendously funny, and he kept us all laughing and appreciating his juggling skills.

With the accent on comedy, Stephen Williams once again performed to close the show. He quickly engaged the audience and lots of audience interaction ensued as Stephen (and his mindreading goose) made a number of predictions. Stephen's final effect involved a series of direct predictions based on audience choices. This was a very good effect to close the show and the audience showed their appreciation with a standing ovation.

The Show was a great show that delivered a great deal of entertainment from a talented group of performers, and judging by the audience reactions, this was definitely a 'feel good' night out with lots of laughter and amazement.