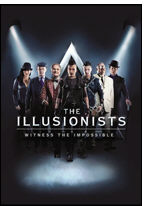 The Illusionists kicked off their U.K. tour in my hometown of Bournemouth, which was perfect timing as it was the day before my Birthday, so the tickets were a Birthday Gift!


The show featured: Jeff Hobson “The Trickster”; Dan Sperry “The Anti Conjurer”; Andrew Basso “The Escapologist”; Kevin James “The Inventor”; Mark Kalin “The Gentleman”; Jinger Leigh “The Enchantress” and Philip Escoffey “The Mentalist”. Also appearing were the “Illusionist Dancers” and a fantastic live Rock Band who not only supplied live backing to the acts, but also did their own spot later in the show and were involved in one of the illusions! (more of this later).


A suspended screen above the stage meant that everyone could see all of the action, all of the time, though the venue being quite intimate, and everyone fairly close anyway, the screen was more of an added luxury, rather than a requirement!


Jeff Hobson was the Host who got the audience into the palm of his hands as usual. I didn’t take notes, as I wanted to enjoy the show, so this is being written from memory. I don’t want to give too much away, as I have no intention of ruining the experience for anyone who will soon be seeing the show elsewhere. What I will say however is that it’s production values are SKY HIGH, the show is Slick Slick Slick! I truly believe that to see a show of this caliber, you would need to go to Vegas!


Stand Alone Highlights for me, were Kevin James with his Floating Rose.


Jinger Leigh & Mark Kalin with probably the most convincing “Sawing a Women in Half” EVER!!!


Mark Kalin with his Billiard Ball Routine (oh how the audience GASPED!!)


The Vanish of the Band Members, with their reappearance in the audience, playing their musical instruments! Complete with all the pyrotechnics etc.


Jinger Leigh’s presentation of what looked like the Don Wayne Floating Ball.


I even liked Dan Sperry “The Anti Conjuror” who let slip a “softer side” with his lady helper from the audience!


There was even Close Up Magic performed IN THE AUDIENCE (The screen DID come in handy for this!!).


The whole show was SUPERB, the response from the audience was fantastic.


I was even hugged and kissed by the wife of one of my customers from the Magic Studio upon leaving the venue, with her saying that it was the BEST SHOW she had ever seen!!! (She would not have known about it, if I had not told her, a week or so before). Unfortunately this brings in slight negative thoughts from me, as the venue was probably less than half full, there really was something for everyone, BUT the publicity should have been better. The problem (I think) is that the public (mostly) don’t know who the performers are. The show should have been promoted as “Las Vegas” comes to the U.K. or something like that. Also as an established Magic Shop in the U.K. I should have had leaflets and other promotional material, to give to customers and put into orders, as I would always do what I could to promote magic, as most people already know...


I would also like to add that next year the show tours Australia, and James More from the U.K. is in the lineup, he will fit into this show PERFECTLY!!! If the show comes near you, DO NOT miss it, it’s Fast Moving, Spectacular, Amazing Magic, Beautifully Produced, Great Artists, PERFECTION, and COULD herald the return of the BIG spectacular Magic Shows, but only if these type shows are supported, and more importantly publicised better, TELL EVERYONE YOU KNOW!!!!