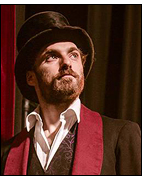 This is a show about magic. But not a magic show. “I’ve been able to work out, deconstruct and rebuild every trick I’ve ever seen. Except this one.” Hugo Cedar was an Edwardian magician known as “The Vanishing Man”; he created the perfect trick and then disappeared forever, but his story lives on…. Directors and performers Simon Evans (magical consultant to the NT, Old Vic and Donmar Warehouse, and two-time recipient of the Close Up Magician of the Year award) and David Aula (‘The Cement Garden’, ‘Personal Enemy’, and ‘MEAT’), team up to create a time-hopping, misdirection-abusing, mind-bending examination of what really happens when a man, in full sight of his audience, simply ceases to be. This is the story of a magic trick: the greatest one ever performed. Produced with gererous support from the Unicorn Theatre. Suitable for age 12+

I didn't know exactly what to expect from The Vanishing Man, but I'm glad I didn't see a "magic show". The story was charming, moving and full of playfulness. A tale of two friends desperate to find Hugo Cedar's secret behind his vanishing trick and explore the ideas of reality and truth. The weirdest magic show you will ever see, that will totally immerse, delight, and amaze you. Audiences should not be under any illusion that they are going to see a magic show, but the play is packed with audience participation based card tricks and sleight of hand that drive the story. The revealing of magic techniques in any performance may make some magicians clutch their gimmicked decks and hide inside their top hat. But David Aula and Simon Evans' "magicians code" breaking antics were necessary to the story and wouldn't jeopardise any professional magician's work.

The pace of the show throughout was spot on, with a rollercoaster of fast duologue, audience interaction, and thought provoking monologues. They took a risk in the way they involved the audience so much - with it being a tour of theatres in areas that aren't used to immersive shows - but it paid off! Although slightly reluctant at first, I could feel members of the audience wanting to be involved more and more towards the end. No doubt down to the two charming actors. I have to say, it's one of the best pieces of theatre I've seen in this area. You really have to see it to believe it! The tour continues, catch it at your nearest theatre!