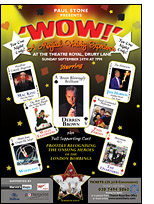 Just sitting in the likes of the Theatre Royal in Drury Lane in itself creates the ambiance of an old time variety show before the curtain is even raised.

After the opening overture of the ‘Ian Mac Big Band’ and the ‘Sophistication Dancers’ performing a Moulin Rouge type set, Charlie Frye & Co. was introduced. Like most of the acts, Charlie is in great demand and it is easy to see why. He romped through a highly energetic and entertaining juggling act with some excellent sight gags and comic sequences and got the theatre buzzing after an excellent start.

Pilou, who recently won the Grande Prix at FISM was next with a street urchin character manipulative act featuring predominantly cards, and apples (balls). It was a tough spot for him, being much lower energy than the previous act, which he suffered slightly for but it was a very enjoyable performance.

Mac King was exactly the Mac as known showing in the most demonstrable way that you can have an audience eating out of your hand with the simplest of card and rope tricks. He recovered (as always!) from a number of spectator mishaps and finished with his hallmark vanishing head in a paper bag and left to much laughter and applause.

‘Soul Mystique’ are a quick change act from Australia and will never be able to escape comparison to David and Dania who have stamped their mark so firmly. Nonetheless, it is an excellent act featuring much Latin American style music and dance with some stunning costume changes. The final costume change was once again, pure David and Dania but in the ‘real World’ where this comparison would never arise, I have no doubts that they will enjoy enormous success.

Paul Zerdin, who used to have a very high profile in the UK as a ventriloquist was next with an entertaining dummy act followed by his use of a member of the audience as a ‘living dummy’. He finished by leaving his dummy alone in a diminished spot-light where it unexpectedly came to life being somehow controlled remotely. This was a great spot that added to the variety.

To close the first half, ‘The Overtures’, played through a medley of 60s music. The fact that they were selected to play at Elton John’s wedding speaks volumes about their musical ability and all five members had the chance to show their individual skills.

After another set from the band, ‘String Fever’ were a string quartet with a difference. In six minutes or so, they gave us the ‘brief history of music’ giving a quick enthusiastic taste of music through the ages, much of which was never intended for a string quartet (and indeed, beyond the range of it) but it was very well received.

Another return of the ‘Sophistication Dancers’ with a ‘Can Can’ type sequence led to the introduction of Jeff Hobson. Jeff did his ‘card-in-mouth’ and ‘egg bag’ as known and it was as phenomenal as ever.

James Dimmare was next up with his doves (and budgie) and canes act. This classical magic act fited perfectly into the bill showing yet another facet of magic at its best.

Wolfgang has a unique acrobatic act where he gyrates around inside an eight foot diameter circular frame and comes straight from Cirque Du Soleil. I have seen this before in a large open space but I was interested to see how he would perform on a relatively small raked stage which dropped into an orchestra pit. Though slightly compromised by these confines, he did his great original act, once again adding to the fantastic variety.

Next to the stage was Derren Brown who started with his ‘which hand is the coin in’ (except that it was a banknote). This played well but is a little difficult to watch with conviction as a magician. He closed with ‘magic square’ which suffered slightly from an error resulting in his psychic persona suddenly quite clearly doing lots of arithmetic as he altered the numbers around.

Wally Eastwood was another juggler spinning clubs at the most phenomenal rate, juggling hats and finally, performing his hallmark ‘playing a keyboard on the floor be juggling balls on it’. For me personally, he quite rightly closed with his combination of extraordinary skill and strong endearment.

Before being re-intoduced to the entire cast, Janina Sweetenham dressed in Britannic costume sang ‘Land of hope and glory’ offering everyone the chance to wave their Union Jacks (supplied together with a high quality programme) and join in.

All in all, a superb night out. It was more than a six hour return journey for me to get to see it but I would do it again without a thought. Wow!!